Hydrangeas are the 5th most important export flower of Colombia in terms of value. Both, volume and value are still increasing. The United States is still by far the most important export market for these flowers, but volumes to China, Russia and Spain have shown an exponential growth. Colombian export association Asocolflores summarized the export figures of January to July 2018 of Colombian hydrangeas and compared it with those of 2017. Catalina Arango, Commercial Director at Flores Del Este, one of Colombia's largest hydrangea growers explains the trends.

Volume and value
After the rose, the carnation, chrysanthemum and alstroemeria, the hydrangea is the most important flower crop of Colombia in terms of value. Exports from January to July of the hydrangeas 2017 vs 2018 show a growth of 11.3% in volume and 1.9% in value and, with a value of 46,661,861 USD. 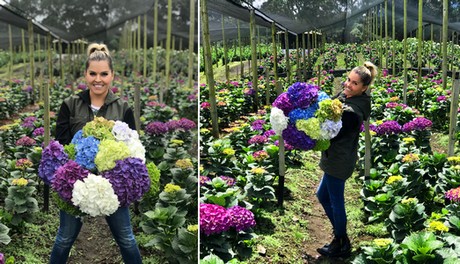 Catalina Arango with hydrangeas in the field

Russia as an interesting market
According to Arango Russia is an interesting market for hydrangeas from Colombia, since it grew 44.1 % in value and 52.5% in volume (Source: Asocolflores). “I believe that flowers for the Russians are still a very important and essential attribute of holidays, family events and public celebrations. And despite the crisis of the past years the demand for flowers is still at a sufficiently high level”, she says.

The largest share of imported flowers is sold in Moscow. According to experts the sales market here accounts for 17.5-23% of the total flower sales in Russia. Moscow is followed by Moscow region and St. Petersburg, 18% and 13% respectively. Today Russia occupies the #6 importer of flowers in the world after United States, Germany, Netherlands, U.K and France.

From flowers at holidays to daily attribute
"As in the United States, the Russian floral market is mainly by holidays like Mother’s Day and Valentine’s Day”, says Arango. “The most important day in gift and flower-giving in Russia is undoubtedly the 8th of March. This holiday is celebrated, and its citizens spare no expenses when it comes to the gifts and flowers. It is International Woman's Day. People in the Netherlands and some other  European countries tend to give flowers year round, creating steadier demand. Following the global trend the Russians will start to consider flowers as a daily attribute of home décor elements.”

“I think that having overcome the crisis in the next 10 years Russia will take the third place in Europe after Germany and the Netherlands in the volume of flowers imports. The actual capacity of the Russian flower market is still estimated by experts at $ 40 billion. We have to take into consideration that for the Russian culture flowers and bouquet-giving is a very important aspect and it is so deeply engraved into the Russian mentality, is a tradition because the act of giving flowers is highly symbolic.”