Ecuador: The origin story of preserved and garden roses

Garden cut roses and preserved roses have become popular products produced in Ecuador, and at the exhibitions in Quito in September, many of them were on display. But when did it all start? Marisa Ortiz of X-ACT Products, a company that is focused on facilitating relationships between parties involved in the flower business, explains. She was one of the first to bring garden roses from Ecuador to the international market in the United States and Canada, and was closely involved in the preserved rose business in Ecuador from the beginning.

Garden roses
The story of the garden roses started in 2003, a year after the establishment of X-ACT Products. Together with an Ecuadorian farm, she worked to introduce the garden roses as a cut flower for export in the American market, when it was not considered as such.

"A good friend of mine has a wholesale company in France. They decided to grow scented garden roses from their own farm in Ecuador to fulfil their demand in France, growing them year-round in Ecuador. They made an alliance with French breeder Meilland, growing all their scented garden rose varieties. They were one of the first cut garden rose growers in Ecuador, so it took some time to learn about the varieties, care, handling and particularly the transport (scented roses have a shorter life than tea hybrid roses) of these varieties, but they succeeded. The roses were received well by their French buyer." 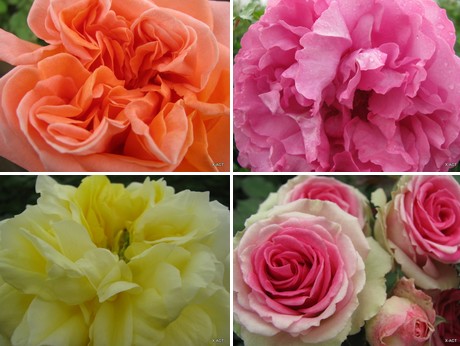 Sometimes, the supply exceeded the demand and that is where X-ACT Products came in. "They had a surplus in production, so together, we decided to start introducing them in the US and Canada." And for this market it was something new. "In the US, they knew what garden cut roses were as they were growing them in California, but they had never seen them coming from Ecuador. In the beginning the buyers were quite hesitant, but when a large customer of mine - my former boss - started importing them, the rest followed."

About five years ago, the farm moved to Ethiopia, but at that time, many Ecuadorian farms were already growing garden or garden-type roses. Now, X-ACT works with another farm and still sees the demand for this type of roses increasing, even though the offer now has expanded and many growers have included this line in their farms. "In the past, it was basically used for the wedding season, but now we see that the season is becoming a bit wider. It is more and more used for other events as well."

Preserved roses
During the time when M. Ortiz was developing the markets for garden roses, she was also involved in the export market for Ecuadorian preserved roses to Europe. "The Japanese are fond of preserved roses. I started with a Colombian grower who has a farm in Ecuador and a partner in Japan. I helped him with looking for customers and offering the products. In 2014, I started working with another farm, who started doing a project with preserved roses. With the experience that I had gained in the previous business, I collaborated with the new farm to develop a good quality product, do trials, ship to customers and always give this feedback between the customer and the farm." And from then on, M. Ortiz saw the demand increasing for this product. Now, X- ACT is selling from this farm and has a large client in Germany, some in Canada, and they are trying to enter Korea and other markets.

In Ecuador, she has seen this product growing a lot. "Many farms are producing roses and are preserving part of the produce. It has two advantages: it splits the risk and the preserved roses can be stored."

Just like fresh roses, also when preserving roses, the quality of the product is essential. "A farm should produce their own roses that they want to preserve instead of buying from a third party and then preserving them. When preserving a rose it is very important to know your product, how it is grown and the quality of it. Only then can a high quality product be produced."

X-ACT Products
X-Act Products is owned by M. Ortiz. She started working in the flower business in 1998 and worked at a rose farm in Ecuador. Then, she moved to the US, where she was responsible for the assembly, operation and management of a branch of one of the major American wholesalers. After 2.5 years, she returned to Ecuador and started X-ACT in 2002 with a former partner. Next to facilitating relationships between parties involved in the flower business, she also markets several products from Ecuadorian farms. "For certain products, we work with certain farms. For hydrangeas, hypericums, garden roses and preserved roses, for example, we work with one farm per product, and for standard roses, we work with several. We try to choose the best products from the best farms. We also represent some customers as their agents in Ecuador and do the buying of what they need, take care of all paperwork, quality controls, search for new product and keep the business ties together."