The cut chrysanthemum is a flower with a wide variety of meanings all over the world. Not only the flower itself, but also the color carries different meanings in different countries. White is a 'color' that is important in many countries, and German breeder and propagator Brandkamp is therefore happy with their new white filled spray variety Lhasa and will introduce it at the IFTF in Vijfhuizen, the Netherlands, from November 7-9. Brandkamp's Sales Manger Jürgen von den Driesch tells us a bit more about the cut chrysanthemum market, why their new Lhasa is a valuable addition to their assortment and what else they will have on display at the IFTF. 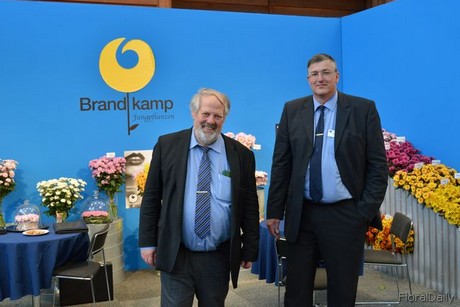 Jürgen von den Driesch and Andre Elijzen at the IFTF 2017.

"When talking about Europe, we have seen the production decrease in Germany, France and some other countries. More and more is being imported from the Netherlands, and particularly the spray types. Currently, the Netherlands is where the largest volumes are being produced, followed by the South European countries, and for autumn time, high volumes are produced in the Balkan States as well. In the North European countries, there is only a small production, also much is being imported from the Netherlands."

Chrysanthemums and events
The chrysanthemum is used for different occasions and therefore has a wide variety of meanings all over the globe. In Eastern Europe, traditionally speaking, the demand for chrysanthemums is high during autumn, when All Saint's Day is celebrated. This celebration is less important in Central and Northern Europe. In these countries, chrysanthemums are often used in mixed bouquets. But in countries in Asia, for example they have other uses. In Japan, Thailand and India for example, chrysanthemums are very popular for the decoration of temples and garlands.

Meaning of color
In different countries and for different events, the color of the flower plays an important role as well. "Purple and pink in Scandinavia, gold/yellow and red in Asia and white in Eastern Europe are the most requested colors." 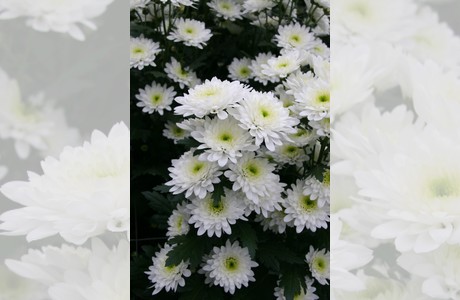 New White
"In Eastern Europe, a minimum of 70 percent of the total autumn production is white", says Von den Driesch. For this reason, he is very happy with Brandkamp's new white spray variety, named Lhasa. Of course, Brandkamp has more white varieties in their assortment, but this one is a little different and according to Von den Driesch fills a gap in the market. "It has white filled flowers with a green center and this is something the market really needs." Besides that in their assortment, it is one of the best flowers regarding shelf life. "The blooms will open slowly and completely. Therefore, the green center will show very long and therefore always looks fresh."

On the left: Branpetit Mix and on the right: Pemba bowl.

IFTF
This new white variety will be on display at the IFTF in Vijfhuizen, the Netherlands from November 7-9, 2019. At Brandkamp's booth (C5.04), more varieties will be on display. The complete Adana family, the Bransmart family and the pot chrysanthemum as mixes in window boxes. For example from the Pemba family, Multiflora Branpetit family as bedding plants in packs, new mix pots with 3 colours per pot will be shown at the IFTF. It will show how different products can be created with Chrysanthemums. "Not always new varieties alone stimulate the market, also new kinds of product forms are important. This is the reason why Brandkamp are not just focusing on new varieties this year."