The Kenya National Bureau of Statistics recently released its Statistical Abstract 2018. The tables, compiled partly from statistics collected directly by the Bureau through Surveys and Censuses and also from statistics compiled by other Ministries, Departments and Agencies, offer a wealth of data about the East African country.

For the ornamental sector, the current state of cut flower trade in Kenya, home to some of the biggest flower growers in the world, is of particular interest - so let's take a look at what we can learn from the data in that respect.

Exports up, Netherlands biggest market
First of all, when looking at the exports of cut flowers, we can see a clear upward trend. In 2010, the value of exported flowers from Kenya was still 31.4 billion KSH (306.5 million USD) - in 2017, this figure had risen to almost 56 billion KSH (545.6 million USD). 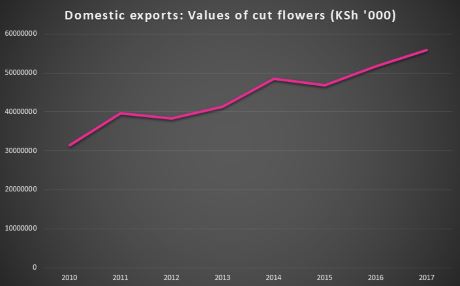 When breaking that down into destinations, the Netherlands is clearly the leading export market, accounting for half of all Kenyan flowers and plants sold abroad, with a value of 29.1 billion KSH (284 million USD). Another major market is the UK, where 8.8 billion KSH (85.9 million USD) worth of cut flowers and foliage were shipped in 2017. Germany follows in third place at some distance already, accounting for 2 billion KSH (19.5 million USD). The USA still makes up a relatively small part of the export pie, but perhaps the direct flights between Kenya and the States will change that. 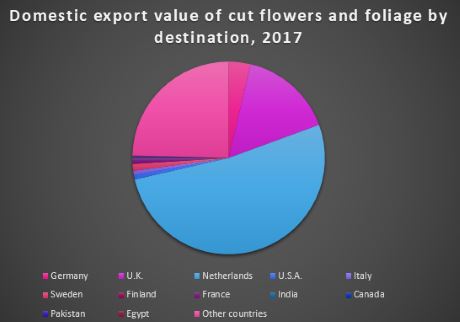 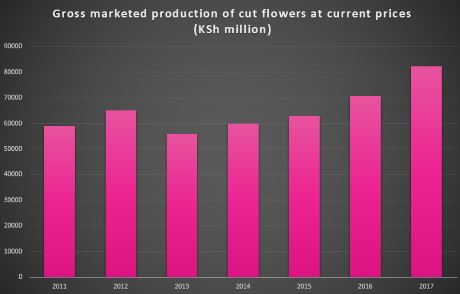 If we take 2001 prices as a reference, the dip in 2013 becomes less significant, while at the same time the increase between 2016 and 2017 is still impressive: 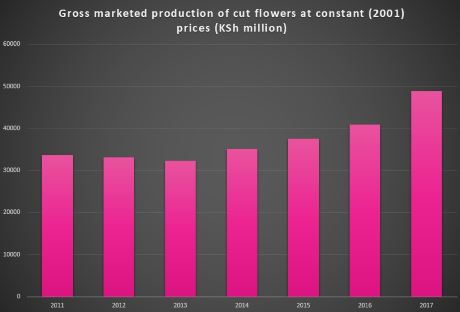 So it appears the Kenyan cut flower market has had a good run last season, but companies need to stay on their toes to keep up the growth. With increasing international competition, airplane cargo holds filling up, and a move toward more local flower cultivation, there are still plenty of challenges ahead for the East Africans to keep the momentum going.