From tropical forests to high-deserts and urban landscapes, Salvias are among the most common ornamental and culinary plant species you will find.

Although its name is derived from the Latin salvere, meaning to heal or good health, this moniker undoubtedly refers to the common herb Sage (Salvia officinalis) and not the ornamental Salvias we find flowering in our gardens. All Salvia are in the mint family Lamiacea and are cousins to landscape favorites such as Nepeta (Catmint) and Monarda (Beebalm). Indeed, many Salvia species reveal their history through their minty fragrance contained in their leaves. There are more than one thousand species in the genus; however, most are not hardy in northern gardens. 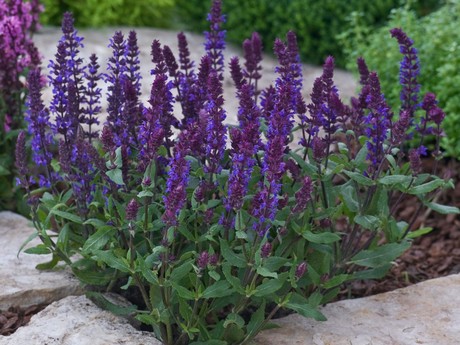 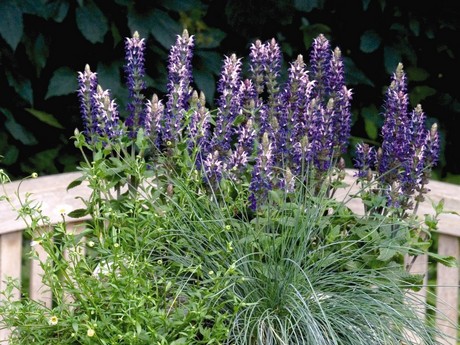 Care and cultivation
Hardy Salvia like S. nemorosa are considered to be care-free and easy to manage in the garden. They can be in place for years without a need for dividing. They are also a favorite of pollinators like bees and hummingbirds. As a member of the Mint family, their leaves are not on the preferred forage list of deer and rabbits and considered to be a great garden addition where these creatures are a nuisance. Be sure to plant in a location where they will receive at least one-half day of direct sunlight, as this will provide an environment that encourages the highest degree of flowering. Salvia prefers soils rich in organic matter, so it may be necessary to add compost, peat moss or topsoil to your sandy or heavy clay soil before planting. Once established in the garden, Salvia is quite drought tolerant and require watering only when other landscape shrubs such as Hydrangea show signs of wilting. To maintain healthy green growth, plan on fertilizing you Salvia plants when they emerge from dormancy in the spring and once again in early summer. Applying a balanced fertilizer such as 15-15-15 according to label directions will do the trick. Many gardeners experience only one spring flowering display from Salvia because they are unaware that these garden beauties can be encouraged to rebloom several times during the summer and well into fall. Once the first flush of flowers has finished and the flower stems have turned brown, cut the plants back aggressively to about one-third their original size. Doing this causes the Salvia plants to push up new shoots from the root system, and you will be rewarded with a new flush of flowers in four to six weeks. Repeat this process, and it’s possible you may see as many as three or more full cycles of flowering in a single season. Remove all Salvia foliage after it turns brown in the fall to promote healthy new growth the following spring. 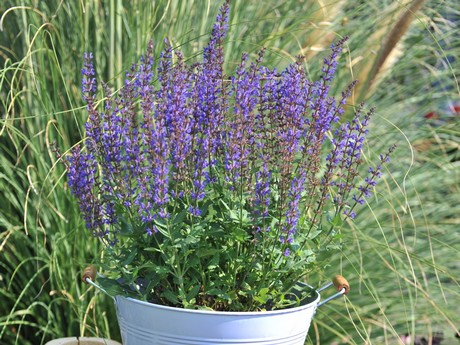 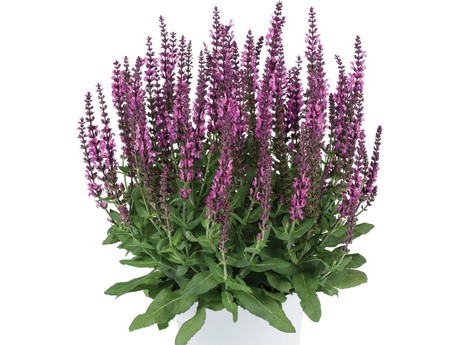 Key cultivars
Much of the early work in hardy salvia breeding was done by German plantsman Ernst Pagels who is credited with breeding varieties ‘Blauhugel’ (Blue Hill) and ‘Schneehugel’ (Snow Hill) shortly after the Second World War. Both of these are still in commercial cultivation and are found in garden centers during spring and summer.

Today, there are several hundred varieties of hardy garden Salvia from which to choose. Likely the most common and well-known cultivar, also a product of innovative German breeding is ‘Mainacht’ (MayNight). Named Perennial Plant of the Year by the Perennial Plant Association in 1997, May Night remains a favorite among landscapers for its abundance of indigo blue flowers and pest and disease resistance. Other standards include the upright, dark-stemmed variety ‘Caradonna’ and the dark purple cultivar ‘Ostfriesland’ (East Friesland). These tried-and-true classics are being replaced slowly with exciting new varieties from flower breeders in the United States and Europe. Award-winning cultivars such as ‘Blue Marvel’ and ‘Rose Marvel’ present extra-large flowers and provide a much longer flowering window. Newcomer ‘April Night’ is earlier to flower, as the name suggests, and is especially popular with southern gardeners. ‘New Dimension’, ‘Bordeau’ ‘Salute’ and ‘Swifty’ are all new introductions that are bred for improved garden performance. Of interest to the category, breeders are hybridizing S. nemorosa and S. pratensis to provide plants with more open and airier flower presentation. Examples include the Fashionista series and Salvia ‘Blue by You’. 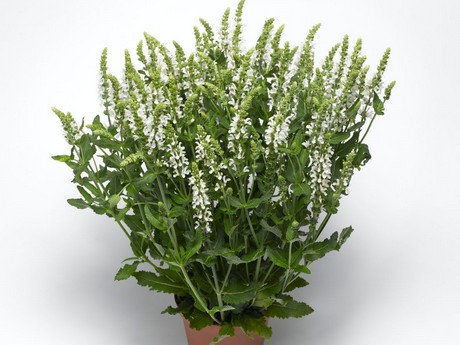 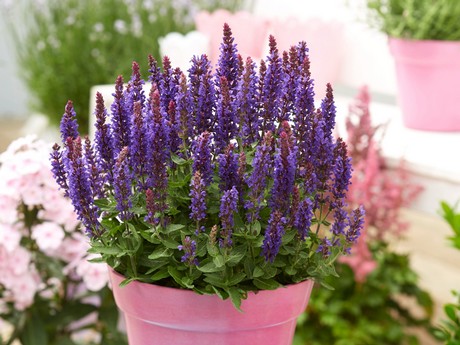