University and business, working together to develop knowledge-based innovation: the University of Bologna and Cefla Group company C-LED have come together to launch a research project designed to bring technological evolution and sustainable development to both the lighting sector and the vegetable, flower and nursery crops sector by exploiting synergies between different manufacturing and economic areas. Indeed, one of the key factors in this joint project is the synergy between the university and the local manufacturing and business communities: this research, in fact, is being carried out in the Imola-based section of the University of Bologna, which, within the multi-campus Unibo network, is known for its focus on two cornerstones of sustainability, safety and the environment.

The co-promoters of this initiative are the Managing Director of CEFLA Lighting, Alessandro Pasini, the firm's Scientific Manager, Mattia Accorsi, and the research group headed by Patrizia Tassinari, Professor of Agricultural Engineering and Bio-systems at the Department of agroindustrial science and technology of the University of Bologna. Thanks to this strategic partnership between C-LED and UniBO, know-how in the innovative LED light design and development field has now been combined with agroindustrial engineering and ornamental plant growing skills. At the core of the experimentation lie LEDs specifically designed for the growing sector (i.e. plant cultivation). UniBO researchers and C-LED's R&D division are working to determine how the qualitative-quantitative effects of different light spectra and intensities (obtainable using different types of LED light, optimised according to the needs of the different crops) affect plant growth. 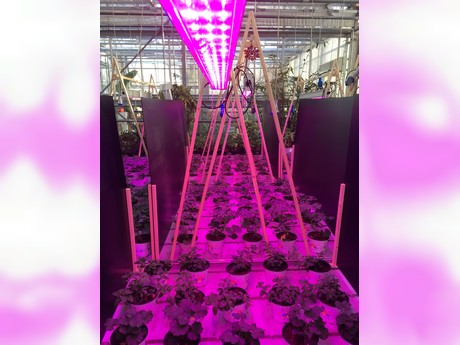 This initial stage of experimentation, performed in the Imola-based high-tech experimental greenhouses of the University of Bologna, focused on popular ornamental plants, such as the common yet imprecisely named “geranium” (Pelargonium zonale) and surfinia, an equally common variety of cascading petunia (Petunia cv Surfinia); for each species of plant, different varieties were selected. The decision to use the two above-cited species lies in their capacity to respond quickly and efficaciously to lighting conditions, while the use of different varieties lets researchers study how LED lights affect groups of plants with different growing and flowering characteristics. During the experimentation, different spectra were studied for different plant types, with spectra being kept constant throughout the plant production cycle. At the same time, growing area parameters were controlled and monitored using specially designed environmental sensors; this was to ensure plants were provided with the same quantities of water and nutrients and to eliminate any differences in climate. Growth results for plants that received only natural light and those cultivated with LED lighting (in addition to the “background” natural light) were then compared.

Initial results showed that, across all varieties, there was a net difference in growth between the plants exposed to the LED lights and the natural-light-only "control" plants. The most evident differences concerned, above all, flowering and overall growth. Plants exposed only to natural light developed very green tissue, elongated stems and larger than normal leaves, characteristics which, from a qualitative standpoint, are not positive. Plants exposed to the LEDs, instead, flowered much more abundantly, maintained a compact form, had sturdy stems and exhibited leaf sizes comparable to those of plants grown in full sunlight during spring-summer. In addition to allowing greater, better plant development, these aspects make the product more marketable on account of its high quality. 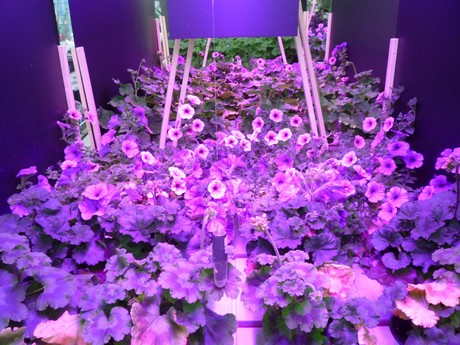 An analysis of energy use showed that the LED lights guaranteed electricity consumption in line with expectations and provided, compared to the lamps traditionally used in greenhouses, highly significant running cost savings. The results clearly show that LED lights for agriculture constitute a highly interesting sector deserving of more in-depth investigation. 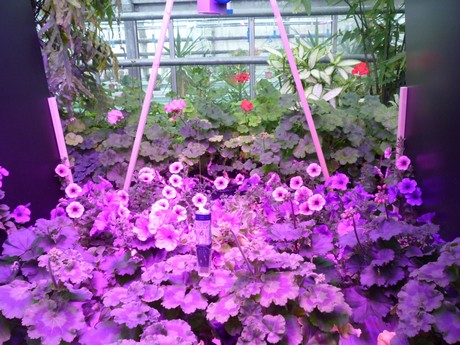 Several other experiments - largely concerning other crops and specific, delicate stages in the growing process - are already in the pipeline.