A breeder does good business when he can deliver the varieties his clients ask for. In the past, this would mean walking through the trials with a wish list, now it generally means putting his material under the microscope. It is there, with the help of increasingly precise techniques and calculation models, that he can work faster and with more precision.

One of the techniques that has been at his disposal for years now, is flow cytometry. This technique can be used to see how much DNA and sets of chromosomes – ‘ploidy’ in technical terms – a certain part of plant material contains. That information in itself can already be used to answer essential questions, telling the breeder if it’s useful to go further down a certain road, and whether the expectations he has of his breeding programs, are realistic.

In order to illustrate this, we should distinguish between ornamental and vegetable breeders, according to Eloy Boon, General Manager of Iribov, a company that specializes in flow cytometry. Iribov has a large number of breeders among its clients, having built a firm reputation in applying laboratory techniques in breeding and propagation. Partly thanks to close cooperation with a developer and producer of flow cytometers, the technical process of flow cytometry has been automated significantly. 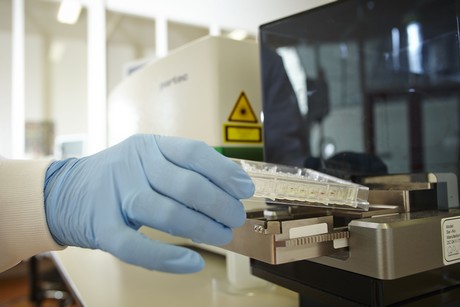 Ornamentals
There are roughly three applications that can lead an ornamental breeder to resort to flow cytometry. First, throughout the history of breeding, many ornamental crops have been brought to a higher ploidy level. That is, diploids – plants with cells containing double chromosome sets, like human beings have as well – have often been turned into tetraploids, and sometimes even hexaploids or octoploids. For many plants and flowers, this leads to a more compact plant, a firmer leaf and larger flowers. Knowing the exact ploidy level for each plant supports the breeder in his decisions.

If a breeder knows the ploidy level of a certain plant, he already has more certainty on if, and to what extent, improvements can be achieved when continuing with the plant material in question.

Something else that occurs relatively often in ornamental crops, is that a breeder generally deals with hybrids that are sterile. That is, varieties that do have the desired qualities, but aren't fertile. When those varieties can be brought to a higher ploidy level, the variety sterility can be broken, and the fertility of the plants restored.

A third application of ploidy determination lies with crossbreeding diploid and tetraploid varieties. The result of this hybridization is triploidy, which ensures the plant is sterile. This way, the breeder provides his genetics with a natural protection, preventing competitors from tinkering with it. That's why breeders often come to Iribov asking for a diploid plant to be made into a tetraploid. The breeder can then crossbreed this back into a triploid, resulting in his own 'protected' variety.

Vegetables
For vegetable breeding, in addition to the above-mentioned techniques, there are a number of specific applications for flow cytometry.

For instance, flow cytometry is used by Iribov in detecting dihaploids, which can be used for inbred lines. Using a microspore, the pollen grain or male reproduction cell, it is possible to create haploid plants, with only one of each chromosome. If you then double those into a diploid, you end up with a so-called homozygous line: a double haploid, that is, a variety in which the chromosome sets are identical. The offspring from this seed is also all identical, which is the reason why this has become the de facto standard in the production of a number of crops. However, the production of these dihaploids also yields haploids, diploids and tetraploids. Flow cytometry can then be used to select the desired haploid plants.

Another often used application of flow cytometry is quality analysis of seed batches; is a seed batch of good quality and homogeneous? An example: Seedless watermelons are generally triploids. By definition, these are hybrids between a diploid and a tetraploid line. But if, as happens sometimes, something goes wrong in the production of the seed, part of it turns out to be diploid or tetraploid as a result of that. This still yields perfectly fine melons, but some of them will contain seeds. Using flow cytometry, a sample of, say, 200 seeds, can be examined to estimate the percentage of triploids.

A third, related application of flow cytometry, is the timely prevention of another type of defect that can occur in seed propagation. It could be compared to the Down syndrome in human beings: when propagating, seeds can emerge that have an extra chromosome. Boon explains that this is mostly problematic in crops like cabbage and broccoli. When this occurs, it's possible that a cauliflower, for instance, doesn't develop a head, making it commercially unsuitable.

Aneuploid in Brassica. Left a good plant, right a plant with an extra chromosome that causes abnormal growth and no cabbage formation

Doubling chromosomes
All things considered, it can be said that depending on whether it's ornamental or vegetable breeding, there are various possibilities when it comes to using flow cytometry.

The analytic laboratory at Iribov constantly receives leaf samples from around the world, looking for the right answers for the questions that come with it. Flow cytometry is just one tool, but the laboratory boasts a range of techniques. For instance, Iribov specializes in doubling chromosome numbers. "Human beings have 23 chromosome pairs", Boon explains. "That's always the case - that is to say, the ploidy level is stable. People are always diploid. But in plants, that's more flexible. In general, we can double the chromosome number of any plant. In many crops, that has already happened over the course of their breeding history. In gladioli for instance, which are often octoploid, having gone from diploid to tetraploid to octoploid. While that can happen spontaneously, it's been done artificially for a long time now. We're able to do that in our laboratory. If you want to check whether it's been done properly, you can do that excellently through flow cytometry."

Counting chromosomes
As a specialist in ploidy determination, Iribov has decided to support their customers with a technique that provides even more information about the plant.

"More and more, we're asked how many chromosomes certain plant material actually has", Boon concludes. "That is useful information when you want to hybridize or backcross. How many and which chromosomes from both parents appear in the hybrid? Through hybridization, it's possible that random chromosomes from one of the parents disappear. The small differences can only be demonstrated through a chromosome count. Because of this expansion in our expertise, we've added a specialist in this area to our team. We also started a partnership with Wageningen UR. They have a department that deals with this and similar techniques, but doesn't focus on the development of routine procedures."

Contact
The commercial team at Iribov was recently expanded with Rick Vreugdenhil, who will mainly focus on the activities of the analytical laboratory. For questions about flow cytometry and chromosome counting, you can contact Rick.