China is one of the fastest growing markets in the world. With the aim of developing this fascinating market, PRIME Flowers opened their own office in China four years ago, importing flowers from Colombia, Ecuador and South Africa. But how did the flower industry in China develop over the last years? CEO David Perez explains how the increasing development of the Chinese floricultural industry is slowing down the imports of cut flowers. 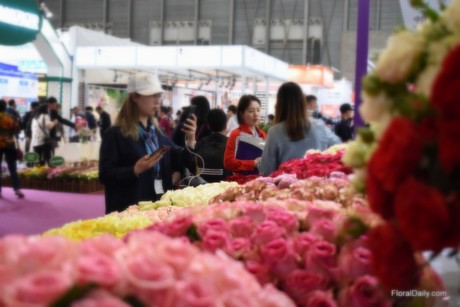 Picture was taken at Hortiflorexpo 2019 in Shanghai, China.

Ecuador dominated with an important volume of gypsophila, followed by Thailand which has been an important supplier to China for decades. The top five was completed by Holland, Kenya and South Africa.

Nowadays is not easy to find a market with such a growth level, however, China used to have growth rates over 30% in the previous five years and it’s important to look deeper in the numbers in order to understand the market.

Largest grower worldwide - 1.4 million ha
Based on a report presented by Beijing Review on April 2019, China represents the largest flowers grower worldwide with more than 1.4 million hectares dedicated to the floricultural industry. The industry has become a priority for Beijing, at provincial levels the Government is encouraging not only production but also innovation, research, development and its aim is to make China a global player in the floricultural industry. China is hosting the International Horticultural Exhibition this year under the name EXPO 2019 (next version will be in Amsterdam in 2022). The exhibition was opened by Xi Jinping and 10 other heads of state on April this year and it is impressive to see the importance that China is giving to the industry.

The importance covers different areas such as consumption, production, scientific developments and infrastructure.

Cut flower exports increasing
The International Trade Centre ITC (Geneva, Switzerland) has registered that the Chinese fresh cut flowers exports have jumped from US $87.7 million in 2014 to US $108 million in 2018. It is still a slower growth rate compared to its imports, however, this starts showing and international trend that China will keep on increasing its volumes. The exports mainly reach countries in South East Asia, but you can see how countries such as Australia and the United Arab Emirates are starting to buy Chinese flowers.

Slower growth imports
Therefore, a slower growth in imports is aligned with the increasing development of the Chinese floricultural industry. This means that Ecuador, Holland, Colombia, Kenya and South Africa need to concentrate efforts on innovation, development of more varieties and improving the logistics chain in terms of costs and efficiency since it is still a big issue when exporting to China.

The Chinese consumption and middle class will keep on growing and it is definitely going to be a top consumer of flowers, of all types and qualities. But in order to properly make China (in the long run) an important market for flowers, foreign companies need to increase their competitiveness and keep on innovating.

At PRIME Flowers, our commitment is to help our growers from Colombia, Ecuador and South Africa in the development of a competitive strategy for this market.