"The Vanda orchid is a rare and beautiful flower"

The number of orchid species in nature is sometimes estimated at 20,000. This enormous variety includes very exclusive generas. Vanda is one of them.

The Vanda originally grows on the southern slopes of the Himalayas and in the region from India to South China. The orchids grow high up there in the trees of the jungle. With its long roots, the plant attaches itself to trees. The roots feed themselves with rain and morning dew. 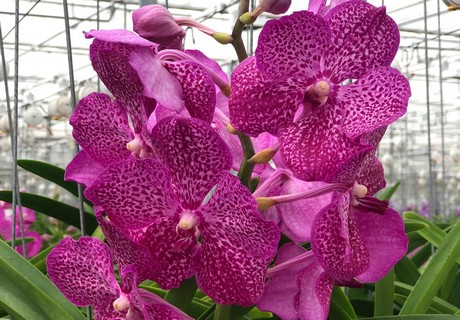 The Vanda is sold as cut flower and as flowering plant. The flowers of the Vanda will keep for a long time: in the sitting room, the flowering plants and cut flowers can be enjoyed for weeks. Due to its slow growth, the Vanda is extremely robust and is better in withstanding less favourable conditions than other indoor plants.

Anco pure Vanda, established in the Westland, is a grower of Vanda. The passion for Vanda started decades ago; on a business trip in Thailand Steef van Adrichem of Anco pure Vanda met Tamlong Suphachadiwong of Suphachadiwong Orchids, the breeder of Vanda orchids. In this way, he was introduced to a unique plant which was not yet grown on a commercial basis. With a lot of patience and perseverance, the breeder succeeded years later in breeding new varieties which could be sold commercially.