The box tree moth has caused severe damage to this popular tree/hedge since it was first detected in Europe in 2007. Capsanem, an effective environmentally sustainable solution based on entomopathogenic nematodes, has proven to control this destructive caterpillar which has left a trail of destruction through forests, parks, tree nurseries and gardens in France, Germany, the Netherlands, Switzerland, Austria and the United Kingdom these past few years. 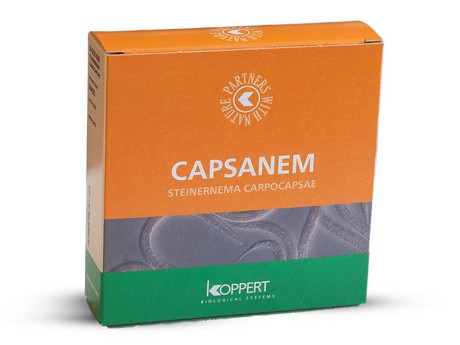 Lab and field trials have proven that Capsanem, containing Steinernema carpocapsae nematodes, can effectively control the Box tree moth which attacks the common box tree (Buxus sempervirens) as well as Buxus microphylla, Buxus sinica and Buxus colchica. The first sighting of the moth from the Crambidae family, a native to South-East Asia, was made in Germany in 2007.

‘In the past we could only place traps and monitor the box tree moth by using pheromones, but we now have a new curative method to control them, in addition to Bt based products or mating disruption and Trichogrammas (which are only available in a few countries)’, says Koppert Product Manager Cyrille Verdun. Several cities in France are already using nematodes against this pests, and with success. Most of the time they are used as a complementary solution to Bts which are often difficult to handle in public spaces due to their status as crop protection products.

Box tree caterpillars can develop in large numbers and in severe cases kill box tree plants. The caterpillars will defoliate plants and leave skeleton like leaves with webbing that can cover the entire tree. They can even bore into the bark of more mature box plants. Box tree caterpillars are green with distinctive black stripes and white dots.

Control methods
As a preventative measure, the cocoons of hibernating larvae need to be identified and removed from November to March. It is then important to detect the early signs of an attack in spring. The first step is to place box tree moth traps (Buxatrap), pheromone traps containing the sex pheromone Pherodis Cydalima perspectalis, to lure the moth. This attracts the male moths to the traps. Not the females that lay eggs and spread the plague. The second step is to use Capsanem (entomopathogenic nematodes) to control the larvae of the box tree moth. Evening sprays of these predatory nematodes are recommended. 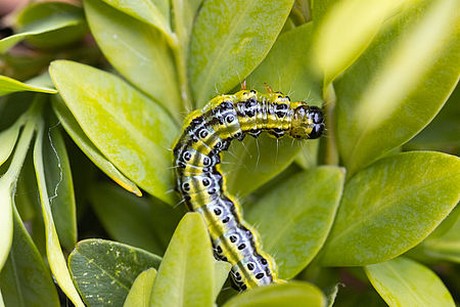 Nematodes provide solution
Although Koppert Biological Systems has been rearing nematodes since the 80’s, they have mainly been used in soil applications against soil pests, like thrips larvae or vine weevil larvae. More recently Koppert’s R&D Department has carried out extensive research into nematodes with specific attention to foliar applications.

Laboratory and field studies have shown that the nematode, Steinernema carpocapsae – Koppert’s Capsanem product – effectively kills the young box tree moth larvae (Cydalima perspectalis). It is recommended that the nematodes are applied when there is a high humidity level around the leaves. This aids the nematodes to keep alive long enough to search for their prey and kill it. ‘But the nematodes stay alive on the leaves much longer then expected, which makes Capsanem an indispensable solution for box tree growers and public greens’, Cyrille ads. More research is needed though, that’s why the Research&Development team at Koppert is dedicating more research into foliar application also in the coming years.