Orange: The new trend in flowers

"We've heard from several large US retailers that orange is becoming a more important color year-round", says Juan Carlos Gonzalez, Executive VP at GR Chia SAS-  a system for the production of flowers that covers 950 ha of cut flower cultivation in South America. They mainly supply to the US market and are therefore happy with their new orange rose introduction Clementina, from Dutch breeder Select Breeding. As a result of the good responses they received, they are currently expanding the growing acreage of this variety.

Importance of orange
Over the years, the importance of the orange color in flowers seems to have increased, and according to Gonzalez, this is especially true for the retail market. "For us, this color has gained an important spot in our assortment. In roses, Red is the main color (40 percent) and the remaining 60 percent consists of colors, of which 15 percent is orange."

Especially from June until Thanksgiving when it reaches its peak, orange is in high demand at retail. "They change colors according to the season and over the last three years, we have seen a switch to these colors in most crops, including roses." And Gonzalez is told that orange is becoming even more important as it is expected to become more in demand year round. "For our chrysanthemums for example, we now also see a year-round demand, usually this was only grown during the fall season. And we expect the same will happen for the other crops." 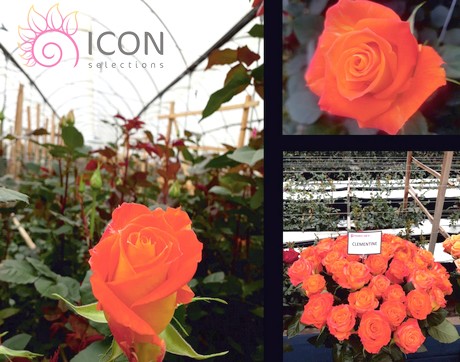 Clementina
"Besides the nice bi-color - yellow on the outside and bright orange on the inside - and slow but full opening, it has other characteristics that are particularly interesting for the growers, like a high tolerance of botrytis (which is not often seen in this color) and a high productivity of 130 stems per m2 per year. This is above the average of 110-115 stems in this area." It might not be the longest rose on the market - the majority production is 50-60 cm stems, but this is perfect for the US retail market, says Gonzalez. 95 percent of their varieties are sold in the US, distributed by their sister marketing companies, like Queen Flowers under the brand of BENCHMARK GROWERS.

Clementina is bred by Select Breeding and represented in South America by Icon Selections, an independent chrysanthemum breeder that also test, selects, promotes and sells roses, alstroemeria, asters, and solidago varieties from Dutch breeders. After six years of testing all kinds of code varieties of roses that were specifically bred for the South American growing conditions and the US market, Clementina was one of the selected varieties. Several of Gr. Chia's growers started to plant the first Clementina plants in 2017 and had the first commercial production in fall 2018. All 26 rose growers (based in Bogota and Ecuador) are growing or will play the variety soon.

Reactions
According to Gonzalez, the reactions are very good. So good, in fact, that they are expanding the acreage. "Right now we have close to 300,000 plants in the ground and by the end of the year, we are planning to have 350,000 plants on 5.5 ha.”