A broader assortment for wholesalers, and a better chain from wholesaler to florist, using modern technology. At Hasfarm, they had been striving for this for years, but the final piece of the puzzle fell into place when they bumped into FleuraMetz in Shanghai two years ago. That’s when they saw the opportunity to make this vision a reality. On their part, FleuraMetz was eager to enter the Chinese market, so this encounter was perfectly timed. Since that meeting, the two companies have been in talks about joining forces – a joint venture - Hasfarm FleuraMetz Flowers Ltd. -  for the Chinese market that was officially announced last week. "We share the same vision and perfectly complement each other", says Frank Koenen CEO of FleuraMetz. 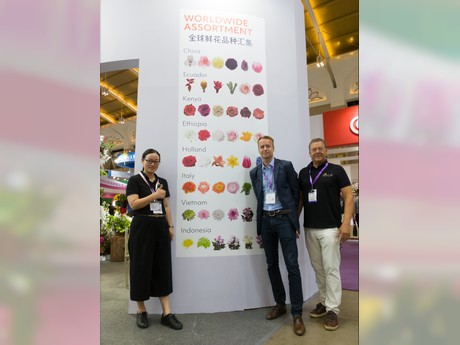 Hasfarm's side of the story
Hasfarm has been active on the Chinese market for many years and have their own distribution center in Shanghai. Over the years, they have seen the traditional wholesale channels changing. "Usually, a florist would go to the wholesaler on the wholesale market - that was established in a large city - to buy their flowers. But as the real estate got more expensive in the large Chinese cities, more and more wholesalers are forced to continue business outside of the city. In turn, it also forces florists to make a longer journey. And this, combined with the trend that fewer florists want to get up early to buy their flowers at the wholesalers, makes the entire trip less attractive. On top of that, quality is another major issue. There is no cold chain, and our high-quality products are placed next to low-quality products of local growers (which might even carry diseases) which results in a decrease in quality of all products", explains Tim Scalongne, chairman at Kunming Hasfarm.

So, at Hasfarm, they were looking for direct contact with the florists for quite some time. "However, even though we have 3 farms in China, 4 in Vietnam and 1 in Indonesia, we could not offer all products a florist needs. Therefore we were looking for a partner." 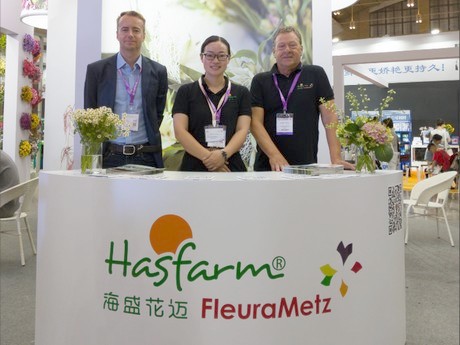 FleuraMetz's side of the story
FleuraMetz is active in many countries and distributes their products which they source from South America, Africa and Europe in three continents: Europe, North America and recently also Australia. They are known for their IT and marketing knowledge and have set up several apps across the world to process orders. Entering China was something that had been on their list for quite a few years, but as it is such a complicated market, they haven't done it. "Until we met Tim in Shanghai", says Frank Koenen. "It instantly felt good, we both had the long-term vision and we are complementary."

Joining forces
So, they quickly saw a good opportunity to join forces. For two years, they have been testing FleuraMetz's products on the Chinese market as well as the logistics to bring these products from the different production areas to this market. Together with Hasfarm's products it enables them to become a complete B2B partner for Chinese florists and wholesalers.

And with FleuraMetz' experience in IT and marketing services, they also set up an online order platform for florists. "Then, we can supply the florists with our products within 24 hours."

They will start supplying the florists out of Shanghai, where Hasfarm already has its own distribution center with a cooling area for storage and packaging and loading docks. 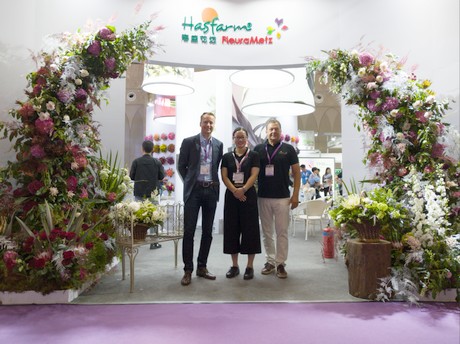 Challenges
Setting up the online order platform was quite a challenge, however, explains Koenen. "At FleuraMetz, we've set up several online order platforms and apps all over the world. Every time, it is a challenge, but as we want to host it locally, due to the firewall in China, it was extra challenging. In cooperation with Chinese technicians who we trained at our headquarters in the Netherlands, we were able to set up an order platform that enables the Chinese florists to pay by WeChat Pay and Alipay, the most used payment methods in China."

Also order platform for wholesalers
Besides supplying florists directly, they also have the ambition to cooperate with wholesalers all over China and offer them an online platform in their own lay-out so that their florists can order online at the wholesaler in their area. Hasfarm FleuraMetz Flowers calls this the B2B+ Strategy, where they offer exclusive IT and marketing services to selected long-term wholesale partners all over China.

Live on July 15
Hasfarm FleuraMetz Flowers Ltd. will start in July, operating from their Shanghai distribution center, and will be live on July 15. "From July 12th until July 14th the new joint venture will present itself and introduce the online order platform at the Kunming International Flower Expo of China. Afterwards, we will go live."