Freakish to look at, unusual shapes and a good story: carnivorous plants attract spiders and insects with their colourful and bizarre appearance. They then catch and digest these creatures to obtain their nutrients. The best-known Carnivorous plants are the Venus flytrap (Dionaea muscipula), Sarracenia, sundew (Drosera) and pitcher plant (Nepenthes).

Their hunting techniques differ from plant to plant. The Venus flytrap uses trap leaves that slam shut incredibly quickly. With sundew the prey gets stuck to the leaves with tentacles. Ingenious: Sarracenia's leaves are pitcher-shaped and insects are trapped in them. Nepenthes also uses pitchers that hang from the ends of the leaves. 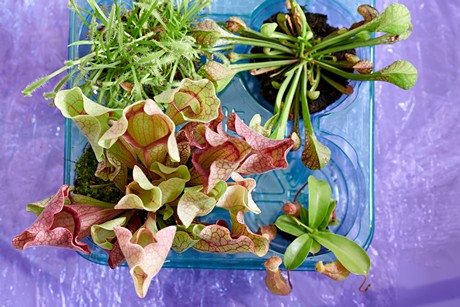 Origin
In the wild Carnivorous plants grow in fairly damp regions with nitrogen-poor soil such as swamps. Nepenthes does that in Southeast Asia, the Venus flytrap and Sarracenia come from North America, and sundew grows on all the continents apart from Antarctica.

Range and assortment
Pitcher plant (Nepenthes) is a soloist, whilst Venus flytrap (Dionaea), sundew (Drosera) and Sarracenia are often offered in mixed trays.