Last year the TBM-Irisweg biomass plant in Bleiswijk was put into operation. The installation - with a capacity of 14.8 MW - is connected to the RoCa pipeline. John Ammerlaan from Plantenkwekerij Leo Ammerlaan/Plantise is a co-owner and user of TBM-Irisweg. "The great thing is that we only purchase heat when we need it."

TBM-Irisweg is a collaboration between the Brabant company TBM and Plantenkwekerij Leo Ammerlaan/Plantise. In addition to heat, also 1.1 MW of electricity is generated in the installations by a number of steam generators.

How did the biomass plant come about?
“In 2014 we had plans for geothermal energy on the Irisweg. During the discussions about this, we got into conversation with a party with plans for biomass. So that was TPM. Initially, it was about a biomass plant in an existing location because of an existing scheme. In retrospect, it was better to place the boilers and biomass storage in a separate building at our company’s location. After we submitted a project change, things started moving fast."

What happened next?
“In June 2016, it turned out to be possible to build the power plant in a new location; in July work started with drawing up the plans and the power plant was put into operation last April. If there is a will, it can occur fast. That is therefore different compared to the discussions around the heat network: That is not progressing fast. And that is not in the interest of horticulture."

How does the plant work in practice?
“The wood chips come from the region. These are incinerated: the heat is supplied to the grid, to the RoCa pipeline. We also purchase the heat from the biomass plant via the grid. The great thing is that we only purchase that heat when we need it. This is good for us, but also for the installation: if it were only dependent on us, then you would often have to deal with excessive power fluctuations in the biomass installation, which can have negative effects.” 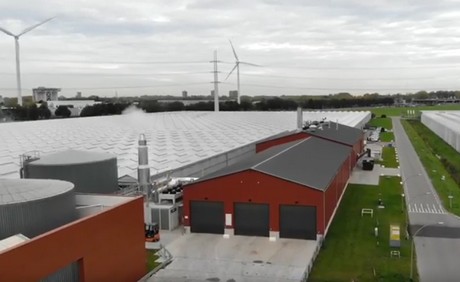 And what does your own energy management look like?
“Because of the biomass plant we use decentralized heat production for part of our company and we use less gas. We still have a number of CHPs and a boiler: but now we use these a lot less. But I expect that horticulture will still need gas and CHPs in the coming ten years. We are not off the gas yet.”