Plants under drought stress change their microbes through their roots

Plants that are under stress from drought can change the behavior of nearby fungi and bacteria, according to a new study led by Franciska de Vries, professor of Earth Surface Science at the University of Amsterdam. By changing the cocktail of carbohydrates that leak from their roots, the plants promote the activity of micro-organisms, with the probable effect of releasing more nutrients and promoting their own growth. The study was published on Friday 12 July in New Phytologist. 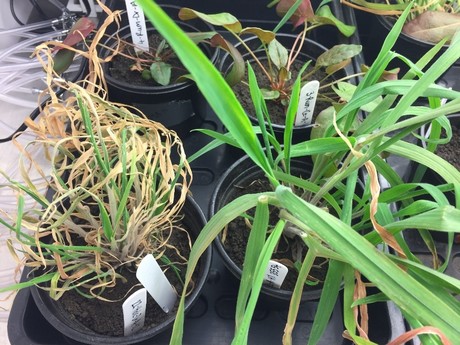 Biologists are increasingly starting to acknowledge the importance of the carbohydrates that seep from the roots of plants for ecosystem functioning. Root exudate, as this cocktail of carbohydrates is formally known, consists of soluble carbon compounds such as sugars, amino acids and organics acids. Up to ten percent of plant photosynthate ends up as root exudate. This used to be considered a passive process; but evidence is mounting that plants use root exudate to influence the microbes with which they co-exist in a mutually beneficial relationship.

Effects of drought
De Vries and her team studied the effect of drought on the root exudate of two plant species that are very common in traditionally managed hay meadows. Both plants, the grass Holcus lanatus and the forb Rumex acetosa (commonly known as sorrel), have very different growth strategies and root systems. H. lanatus is a fast-growing grass with a root system composed of long, thin roots. R. acetosa is also fast-growing but has a much shorter, thicker roots.

The ecologists subjected plants of both species to two weeks of drought. They collected the root exudate both directly after this drought period and after a two-week recovery period. Then they tested the effect of the root exudate on soil samples from the different treatment regimes.

It turned out that both plants excreted less root exudate under drought; but, also for both plants, the exudate did increase the activity of the micro-organisms present in the soil. “This came as a surprise to us”, comments De Vries. 'It is known that plants can increase the microbial activity in the soil by increasing the amount of exudate. But in this case, the increased activity must be due to changes in the composition of the carbohydrate cocktail.'

Survival mechanism
She compares the findings to the well-known example of grass which suffers from stress by grazing. 'Grazing leads to increased levels of root exudate, which leads to increased microbial activity. This releases more nutrients. Thus, the plant promotes its own regrowth. We think the same happens here, but by means of altering the quality instead of the quantity of the exudate. 'The fact that two very different types of plants both show this behavior, means that it might be a wide-spread survival mechanism.'

The team has not studied yet how exactly the cocktail of carbohydrates in the exudate changes, or how long its stimulating effect on the microbial community lasts. 'We have some ideas about this. For instance, we suspect the exudate from plants who suffer from drought contains an increased amount of simple sugars. That is something we are keen on figuring out next.'

The team’s finding is also important in the light of better understanding the carbon cycle in ecosystems and how it is affected by climate change. De Vries: 'The increased microbial activity will also lead to more carbon being released from the soil. Soils are an important carbon sink; but our study shows that droughts might alter this function. Understanding relationships like these will help us better understand the feedback mechanisms in a climate that is predicted to become increasingly hit by drought.'