Farmyard Nurseries must be doing something right, as they celebrate their 35th year of trading located in a remote corner of Carmarthenshire. Owner Richard Bramley is well aware that he has to provide compelling reasons for customers to find his nursery, whether that’s on or offline.

‘Clicks and mortar’
He aims to appeal to both a local market and more distant markets through his ‘clicks and mortar’ sales strategy. The ‘bricks and mortar’ sales channels are the nursery, and a shop and market stall in Carmarthen, all helping to raise the profile of Farmyard Nurseries in its local geographic market. The nursery’s ‘clicks’ strategy has been a more recent evolution and enables them to sell his premium and more unusual plants to affluent gardening markets such as London – in Richard’s words, the internet has “helped level the playing field”. 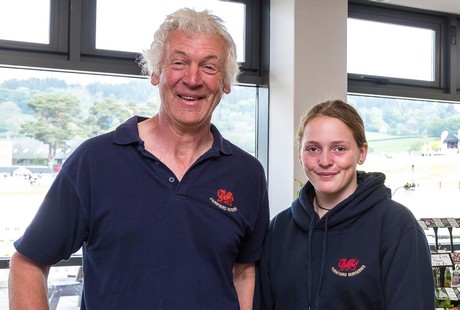 Covering 3 acres, around 50 polytunnels and with room to expand further, Farmyard Nurseries is making the most of the fully funded training support which is available to them through Tyfu Cymru. Richard is wholehearted in his praise for the project, based on his experience of training and support received through Tyfu Cymru versus the experience he has had with other funded programmes.

"Tyfu Cymru is amazing – their whole approach has been so different. They started by asked me what I needed as a grower, rather than coming in and telling me what they thought I needed. The project really has provided me with tailor-made support which has been moulded to our needs.”

Needs based training
Farmyard Nurseries has benefited from a range of training courses, including courses on web design and digital marketing, which clearly helps with their digital sales strategy. Richard expands further, “We did, in fact, participate in the digital marketing and social media course twice because I was so blown away by it and there was so much content to take in and learn. The trainer was an incredible speaker and really knew his stuff.”

Accounting and finance have also been areas whether the nursery has been able to access expert support from a qualified accountant who has helped the nursery implement a new accounts package. This has led to the creation of a new job based in the nursery’s office.

More technical support has been delivered in the form of organic/non-chemical based pest controls with an expert identifying areas of improvement for the nursery.

And Farmyard Nurseries recently took part in the Tyfu Cymru managed Growers Market at the Smallholding and Countryside Festival in Builth Wells in May. Richard candidly states that he would not have participated in the show without the encouragement and support of Tyfu Cymru.

“I would highly recommend that other growers take advantage of the fully funded training support which is available to them through Tyfu Cymru – there’s been a lack of support for the horticulture sector in Wales, and now, at long last, we’ve got this project which provided relevant and tailored training and support which has been really beneficial to my business.”