From cut flowers to potted plants: diversification pays off

Flamingo Holland has traditionally been supplying to cut flower growers across the US, with a focus on the Californian market. Now the company also supplies to the potted plant market. "About a decade ago, we saw a shift in the production of cut flowers, like lilies, to southern countries like Colombia, Ecuador, and Costa Rica. While production costs for growers in the US increased over the years, production in South America, with its favorable climate and low wages, increased", General Manager Robin van der Schaaf says. 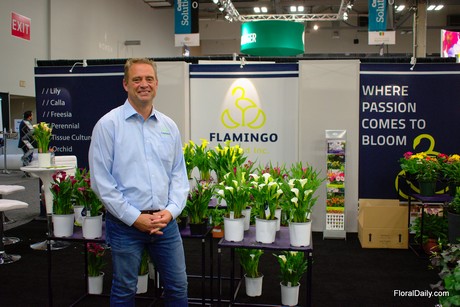 Robin van der Schaaf at the Cultivate 2019, where he talked about the increasing demand for Callas.

Diversification
That change led Flamingo Holland to the decision to supply bulbs for the potted plant market as well. "Diversification in clients and products was our aim", Robin says. "In the beginning, it was a matter of trial and error, because selling potted plants is a totally different ballgame than the cut flower market. We started out with potted lilies, and over the years added alstroemeria, potted freesia, Callas, Garvinea gerbera and perennials, so apart from potted lilies we have a lot more to offer to growers." 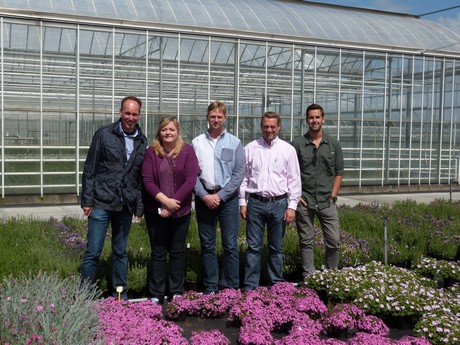 Storage capacity
The bulbs are sourced by parent company Van den Bos Flowerbulbs, tested and prepared for export to Flamingo Holland in California. "The people involved in this are doing a tremendous job", Rob emphasizes. "They are critical and focused on quality. They have to, because you can only get a good end result with a good bulb." Once they arrive at Flamingo Holland's storage facility, the bulbs are treated before being shipped to the grower. "Our storage facility has a major advantage in terms of quality and cost compared to competitors who don't have a storage facility." The bulbs are shipped throughout the country. "We have major buyers on the West Coast, but also in the East of the US. That transport requires a lot of attention. It's still a huge country, where transport mishaps can always happen." 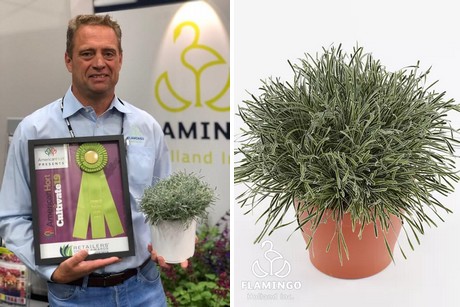 Callas in demand
Talking about Callas, Robin sees a bright future. "It's a product that's in demand, and breeders are constantly making improvements to existing varieties. Also, they're available in many different colors and shapes. That makes them vibrant and challenging", Ron says.

The company's product range has included Callas for nine years now, and it continues to grow every year. "The varieties that do well for us are Royal Princess, White Art, Sumatra, Odessa, Novi Sun, Royal Jazz etc. Buyers are looking for reliable varieties with a low fail rate, that hold their own during long storage. The fact that in Dutch breeding there's been a lot of attention for this, is something we're clearly seeing here."