The residents of the Gachuiro area, at the foot of Mount Kenya, get their clean drinking water from the Ontulili River. Water pipes bring the water from this river to several villages in the area. However, when drought strikes the water taps run dry and when the drought persists, even the river can run dry, leaving the residents struggling to access clean drinking water.

As a solution to this problem, the county government of Meru - after being approached by the members of the Gachuiro Farmer’s Project - sank a borehole at one of the community schools situated a few kilometers from Mathagiro Centre and left the residents to decide how they would access the water. They decided to get access to this water through a piped system. However, there was no budget for it.

Until the neighboring rose farm, Equinox horticulture ltd, which has 500 employees, some of whom come from this neighborhood (Gachuiro), decided to fund part of the budget. 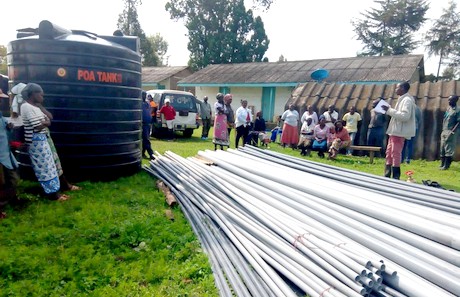 Struggle for water in the off rain season
The residents of Gachuiro area constructed an intake on the Ontulili River which is regulated by the Water Resource Management Authority for their piped water solution, the problem with this project is that water is rationed and when drought strikes the water taps run dry, forcing the residents, including the aged, to walk long distances to the Ontulili River to fetch drinking water. When the drought persists and during the off rain season (December – March) the river dries up due to persistent farming activities up hill, and water flowing down stream reduces greatly. For this reason, the residents are left struggling to access clean drinking water.

No budget for the project
The county government of Meru sank a borehole at one of the community schools situated a few kilometers from Mathagiro Centre and left the residents to decide how they would access the water. On evaluation, the members decided that the solution would be for them to purchase a water connection and storage items for the community to access this water through a piped system. The community project committee came up with a budget estimate for materials required to pipe this water, unfortunately, the majority members of the community are low-income earners, meaning that they were not in a position to raise the monies required to fund this project. 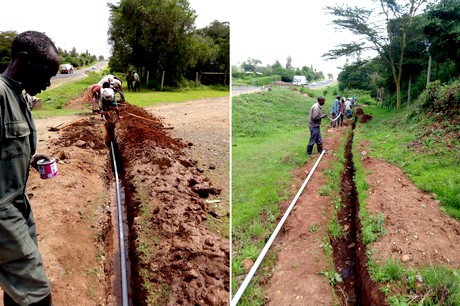 Support from Equinox Horticulture
The project committee members met again to seek a solution to the money problem, they agreed to seek support from neighbors i.e. employers and friends. They approached Equinox Horticulture with a detailed proposal of the project’s expectations and the benefits to be accrued by the community. When the proposal was received, it was reviewed and approved at 50% of the proposed budget which the committee appreciated and the materials were purchased prioritizing those items that would seem more difficult for the farmers to acquire on their own.

More projects supported by Equinox Flowers
Besides the project described above, the Equinox Flowers also supports the community policing initiative that has a station within the Gachuiro area. The project encourages community policing (Nyumba Kumi initiative) and police response during incidents. This has helped greatly in reducing the crime rate in the region and also encouraging youths to engage in productive activities.