Figure 1 below shows a bird’s-eye schematic view of a semi-closed glasshouse. 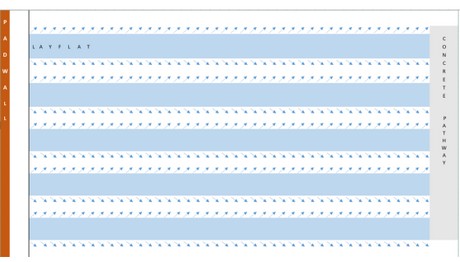 On the left hand side is the climate chamber with the cooling pad wall on the far left. The blue lines depict the ducts or lay-flats through which the fans distribute the air into the glasshouse. On the far right is the concrete walkway which is usually a central pathway with another compartment on the other side.

The fans blow the air into the glasshouse from left to right. The air leaving the ducts does not move perpendicular to the duct. Instead, the direction is slightly to the right, away from the climate chamber, as depicted by the small blue arrows in the diagram. This creates an air movement in the direction of the way the fans are blowing. In this case, the air moves from left to right. It is common to use an inner hose inside the tube to minimise this effect. However, it does not completely negate the problem.

In figure 2 above, a side view is portrayed. The blue arrow at the bottom (1) shows the air current resulting from the air leaving the air hose under a slight angle. This is an unwelcome movement as it disturbs the upwards air movement of the cold air, which is the way the air is designed to move.

The air progresses as a result from the sideways air movement. Once it arrives at the central pathway, there is no plant canopy pushing the current down along at ground level. As a result, the air rises (2). Once above the crop, the air starts moving in the opposite direction (3).

Crops such as Truss on the Vine (ToV) and beefsteak tomatoes are particularly affected by the warm air currents because they do not respond well to warmer temperatures.

Helium balloon
Generally, reducing the fan speed, to the extent that 8 air-exchanges per hour are realised, reduces momentum. The flow of the air is very gentle and is difficult to visualise with smoke (too heavy) or
soap bubbles (too short life span). The best method to visualise momentum is by weighing down a helium balloon to near weightlessness (video).

The video shows momentum is real. It shows a helium balloon moving away from the climate chamber at ground level. As the balloon rises it is picked up by the air current in the top of the glasshouse, going into the opposite direction.

This never fixes the problem completely. When temperatures outside are high, all the air needs to be cooled through the pad wall. Opening the recirculation window allows the hot air to move into the climate chamber and warm up the air being blown into the glasshouse. The volume of air that is being cooled is reduced. The fans must run faster to keep the glasshouse cool, which in turn worsens the problem. Under these conditions, it is always better to leave the recirculation window closed and reduce the fan speed to avoid the effects of momentum. (other ways to keep the semi-closed glasshouse cool can be found here)

At cooler outside temperature it is true that some of the hot air can be removed through the climate chamber, but in that situation, it is better to reduce the fan speed and avoid the problem completely. 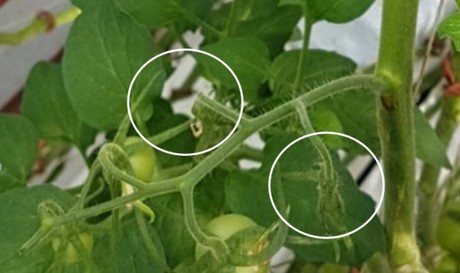 Figure 3 shows typical pollination issues that can arise from the warm air heating up plants. The first two fruit did not set properly, which is typical of damage incurred through momentum. It causes major production losses. The damage will express itself first near the climate chamber where the hot air is sucked down. Increasing the fan speed will result in the area affected becoming larger.

Technical solutions to the momentum problem are being worked on, but for now reducing fan speed is the best and easiest way to avoid or minimise momentum, according to Godrey.

This article is part of a series about growing in a semi-closed greenhouse. Read here more about no-go's for semi-closed glasshouses, cooling and the difference between semi-closed and pad and fan glasshouses.