Ecuador: A visit to a flower farm in Cayambe

Virgin Farms ventured out to the flower farm in the north region of Cayambe, Ecuador. Cayambe is a zone characterized by its surrounding highlands and mountains, with mild weather ranging from 60°F to 68°F. It is also known for its flower production, especially roses. In this adventure, they visited a farm which is located a few minutes from the town of Cayambe. 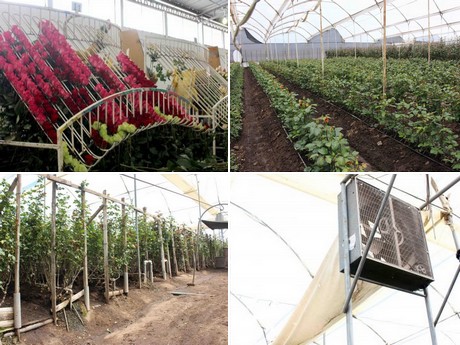 The journey started in the capital city of Quito, Ecuador which is about 55 km away from the farm and it took an hour and a half by bus to get there.

The vehicle left from a northern bus station in Quito, and traveled along the main road to the north of the city. The visitors passed by many small towns such as Calderón and Guayllabamba, until finally arriving at a bus station in Cayambe. The flower farm was about 10 minutes away by car, so they took a cab.

They met with their guide, Luis Peralta, who is also in charge of the farm. They started the impressive tour around the farm in one of the nurseries. It was in this enormous greenhouse where the process of rose farming begins.

The visitors asked some general questions about the farm such as its size, and discovered it was 10.5 hectares or about 25 acres. They also learned that there are 80 varieties of plants grown on the farm. The guide walked them through the complete system for the production of roses. They began in the greenhouse to learn about the plant growth process. During the rest of the tour they learned about cultivation and other procedures such as irrigation, fumigation, and packing operations.