Flame retardants are present in thousands of everyday items, from clothing to furniture to electronics. Although these substances can help prevent fire-related injuries and deaths, they could have harmful effects on human health and the environment. Of particular concern are those known as organohalogens, which are derived from petroleum. Today, scientists report potentially less toxic, biodegradable flame retardants from an unlikely source: plants.

The researchers will present their results at the American Chemical Society (ACS) Fall 2019 National Meeting & Exposition. ACS, the world’s largest scientific society, is holding the meeting in San Diego through Thursday. It features more than 9,500 presentations on a wide range of science topics.

“The best flame-retardant chemicals have been organohalogen compounds, particularly brominated aromatics,” says Bob Howell, Ph.D., the project’s principal investigator. “The problem is, when you throw items away, and they go into a landfill, these substances can leach into the environment.”

Most organohalogen flame retardants are very stable. Microorganisms in the soil or water can’t degrade them, so they persist for many years in the environment, working their way up the food chain. In addition, some of the compounds can migrate out of items to which they are added, such as electronics, and enter household dust. Although the health effects of ingesting or breathing organohalogen flame retardants are largely unknown, some studies suggest they could be harmful, prompting California to ban the substances in children’s products, mattresses and upholstered furniture in 2018. 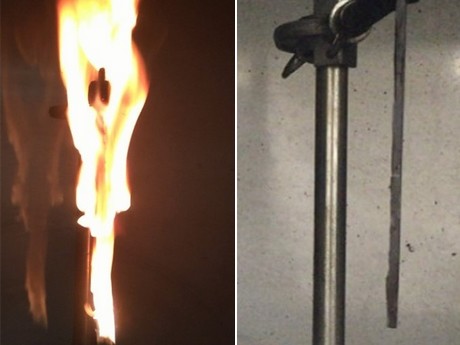 A flammable epoxy resin (left) burns, but one coated with a plant-derived flame retardant (right) does not. Credit: Yoseph Getachew

“A number of flame retardants are no longer available because of toxicity concerns, so there is a real need to find new materials that, one, are nontoxic and don’t persist, and two, don’t rely upon petroleum,” Howell says. His solution was to identify compounds from plants that could easily be converted into flame retardants by adding phosphorous atoms, which are known to quench flames. “We’re making compounds that are based on renewable biosources,” he says. “Very often they are nontoxic; some are even food ingredients. And they’re biodegradable –– organisms are accustomed to digesting them.”

To make their plant-derived compounds, Howell and colleagues at the Center for Applications in Polymer Science at Central Michigan University began with two substances: gallic acid, commonly found in fruits, nuts and leaves; and 3,5-dihydroxybenzoic acid from buckwheat. Using a fairly simple chemical reaction, the researchers converted hydroxyl groups on these compounds to flame-retardant phosphorous esters. Then, the team added the various phosphorous esters individually to samples of an epoxy resin, a polymer often used in electronics, automobiles and aircraft, and examined the different esters’ properties with several tests.

In one of these tests, the researchers showed that the new flame retardants could strongly reduce the peak heat release rate of the epoxy resin, which reflects the intensity of the flame and how quickly it is going to spread. The plant-derived substances performed as well as many organohalogen flame retardants on the market. “As a matter of fact, they may be better,” Howell says. “Because gallic acid has three hydroxyl groups within the same molecule that can be converted to phosphorous esters, you don’t have to use as much of the additive, which reduces cost.”

Howell’s team hasn’t yet performed toxicity tests, but he says that other groups have done such studies on similar compounds. “In general, phosphorous compounds are much less harmful than the corresponding organohalogens,” he notes. In addition, the plant-derived substances are not as volatile and are less likely to migrate from items into household dust. Howell hopes that the new flame retardants will attract the attention of a company that could help bring them to market, he says.

The researchers acknowledge support and funding from Central Michigan University.