Gebr. Van der Lugt Lisianthus are building a new six-hectare greenhouse in the Dutch town of Monster. It is an exciting project in which multiple parties are involved, one of which is Verkade Beton. Among other things, they will install a 277-meter long concrete flower gutter, which is so advanced and large that people have started calling it a tunnel. 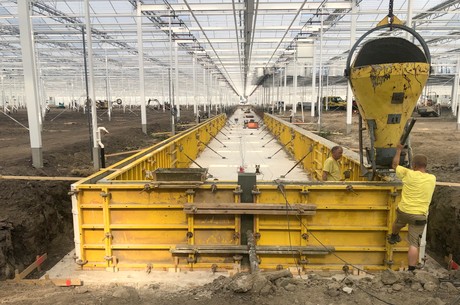 Photographs by Marco van Vianen. For more images, you can go to the Verkade Beton Facebook page

It’s some impressive engineering, pretty unique as well, and the pride and joy of designer Marco van Vianen. “Something like this has never been made in the Netherlands before”, he says. “We hadn’t made a concrete bin for flower transport yet. Normally you would use prefab concrete panels, but in this case, we had to deal with a high groundwater level, so the gutter had to be waterproof. Due to the length, dilatations were also required, which also needed to be waterproof. The dilatations have been poured in with the cement just like a steel construction for the support of the concrete path above it.” 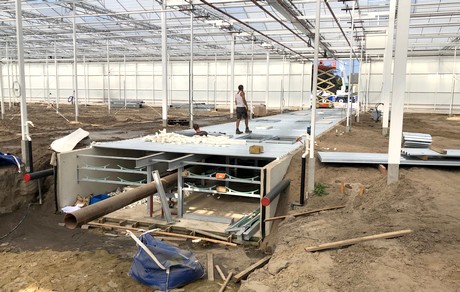 Something that is also quite special is the measurements. Inside it measures five meters in width (the path itself is over half a meter wider) and 1.40 meters in depth. “This makes the steel support construction an absolute necessity because if it weren’t there, the weight in the middle would be too much to bear. To this end, the steel beams in the middle of the gutter have been combined with metal braces, over which four Bercomex conveyor belts are placed. A lot of thought went into making this decision, and everything had to work with the Bercomex specs. But also the pressure on the walls is many times greater when working with a depth of 1.40 meters instead of the more standard gutter depth of 1.00 meters. The depth of 1.40 meters was chosen because Van der Lugt wanted to be able to walk through it since maintenance is required now and then, which means someone needs to be in the tunnel during this time. In other words, now you don’t need to crawl anymore.” 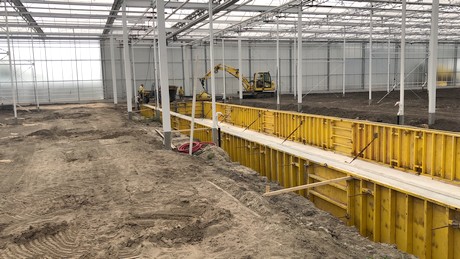 The complexity of the new building project, and especially the role the flower tunnel has in it, is surprisingly big, as Richard Groenewegen of consultancy firm AAB knows. “It is a common thread throughout the company. People have been building for two months, so it’s safe to say a lot of work is required. The conveyor belts underneath, the width of the path, those are all things that have an influence on the rest of the construction of the greenhouse, the electricity, and the heating elevation, even on the positioning of the greenhouse columns and the measurements of the portals above the path. There was a lot of consulting going on with installer Stolze on how the cables should run and how all of the control boxes needed to be placed on the columns. Even now that everything has been placed and installed, and the work is finally done, people still need to wait for the path. When that is done, most of the cables and boxes can finally be connected.” 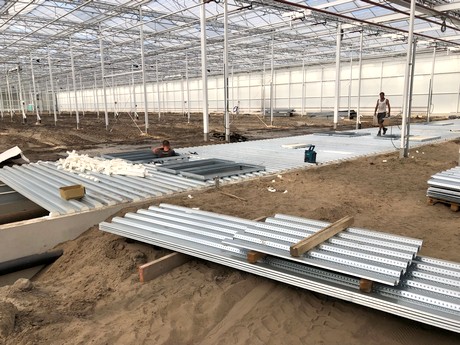 As far as AAB is concerned, the entire project at Van der Lugt is very comprehensive. Richard has been involved in the build from the get-go, over one year before the ground was broken. “Firstly, we arranged all of the (environmental) permits that were needed, and we contacted all possible organizations. Because it involved a re-build project, we also provided a full reconstruction as well as the drawings. The negotiations with both the purchase and the sales broker went via us. Besides that, we designed the front with a large warehouse, the back exit, and the architectural design of the new office. And lastly”, says Richard, who has advised on a previous expansion at Van der Lugt, “many of the negotiations with entrepreneurs go via AAB; we also coordinate all plans: the glass, the energy, the screens, the heating, the boiler, the office space – and also the concrete. Verkade handled the dimensioning, we signed off on it.” 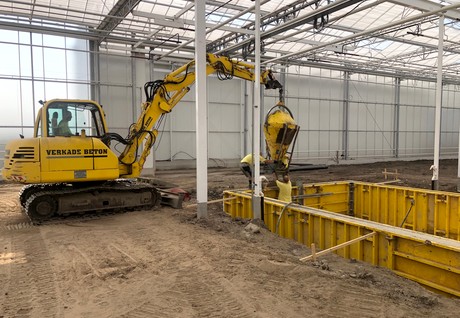 For Verkade, besides the tunnel, the project also consists of other concrete work, a WOT floor, poles for the transformer rooms and a new loading and unloading dock at the rear of the greenhouse. Besides that, they are also working at plant nursery P van Geest, Florensis, Vreugdenhil B&P, Huub van Leeuwen, and many more. “We have our work cut out for us”, Marco, who returned to his old workplace at the start of this year, states. “This was one of the first assignments I could take on, and what an assignment it is. The best part is that we, together with the builder, of course, were able to think up and draw everything ourselves. I gladly worked overtime a few nights to get all the drawings just right, and I think the result speaks for itself.” 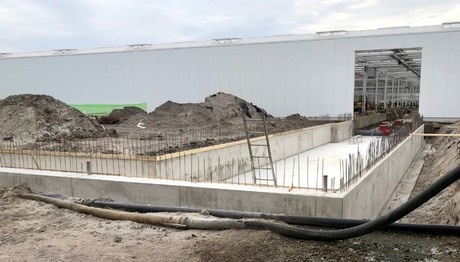