Regarding the predatory mite Transeius montdorensis against thrips, it is known that feeding its population extra increases its effectiveness in the chrysanthemum crop. Because this knowledge is based on old research, Koppert once again checked the effects.

In the context of a study for Perfect Chrysanthemum (in which Koppert is responsible for the crop protection), three situations were compared with each other in their own side study over several cultivation rounds:

The study took place between March and October 2018. All stages of Carpoglyphus lactis were used as supplementary feed, supplemented with food for the mites. 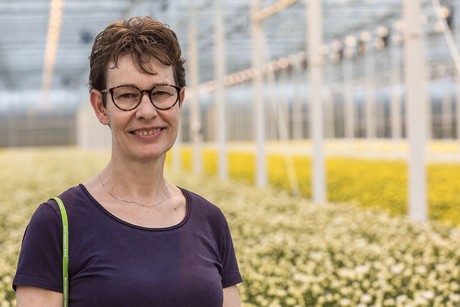 Ellen Klein: "The extra feeding of montdorensis has a clear positive effect on the control of thrips. Moreover, the feeding system is hassle-free."

In short: by feeding montdorensis extra, the population is developing better. And that can be seen in a significantly lower thrips pressure and with much less crop damage as a result.

A trouble-free process
"We are happy with these clear results, they confirm what we already thought", says consultant Ellen Klein. "We can now present a clear recommendation to our customers in the chrysanthemum sector: feed Montdorensis with extra Carpoglyphus lactis and you will have more effect from this predatory mite. In addition, it has already been proven that our supplementary feeding system works immediately. It really is a trouble-free method."

Tobacco thrips in chrysanthemum: tackle immediately after flying-in
Koppert took many samples during the research to get an impression of the thrips pressure at the various cultivation companies. The sample test showed that the Californian thrips were present year round in 2018. As a result of flying-in, the tobacco thrips turned up en masse from week 27. Sometimes large numbers of the pest insects could be seen on the catch plates. However, crop damage was not that bad and most growers continued using biological control.

Incidentally, never were there so many companies investigated (via identification in Koppert's lab) to establish which types of thrips exactly were present. Ellen Klein: "Because we now know that the flying-in concerned tobacco thrips, we can advise very specifically. Our advice for 2019 is to tackle the tobacco thrips after the flying-in with two sprays. After that, it is much less massive and has a much shorter presence in the crop and you can often keep it under control for the rest of the season with predators. So you have more success with biological control."