Despite Brexit, UK businesses still look on the bright side of life

Brexit and recyclability were the hot topics at the Four Oaks show this week, but there's more going on in the industry. Going around the aisles you could hear people discuss topics like the big growers getting bigger, the small getting smaller, many being at the age of retiring while succession is scarce, and the average season growers had.

FloralDaily.com was present at the show to make a photo report, that will be published on Monday, September 9. 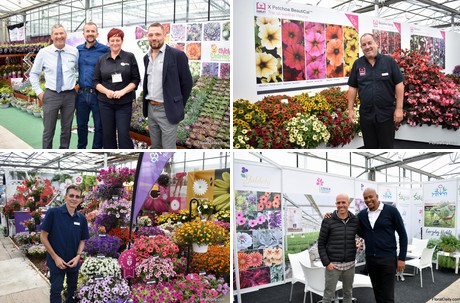 Clockwise: Team of Lovania, Simon Earley of Earley Ornamentals, Paul Jackson, Asaf Cohen of Cohen Propagators together with Peter Bernard of Solgrow and the agent of MNP and Suntory.

Brexit means uncertainty
With Brexit being all over the news, it's no surprise that it was a hot topic at the show as well. Brexit brings a lot of uncertainty for all businesses, including the horticulture sector. What will happen when the UK leaves the EU? What will the exchange rate of the pound do? What documents will be needed when exporting? Those are a few of the many questions that arise.

When talking to the exhibitors at the Four Oaks, many seem to fear the decrease in the value of the pound, as it makes imported products more expensive. However, how to anticipate that? That's anybody's guess. Some growers wait, others continue how they used to and others start to invest. In the vegetable industry, some are expanding their greenhouse in order to make the country more self-sufficient and to rely less on imports.

However, the companies that have been exporting to the UK for many decades say: We've experienced unfavorable exchange rates in the past as well and we kept on going and were able to overcome it. "Therefore, I'm sure we will overcome this as well", one exhibitor said.

Also, when Brexit becomes reality, also new import rules and other documentation will come into practice, but this doesn't seem to worry the companies exporting to the UK. "It is all about being prepared", many say.

Recyclability
Following increasing attention in the media on single-use plastics, industries are moving away from black plastic. Also in the horticulture, it is a hot topic, as the big supermarkets are not accepting black packaging anymore by the end of the year.

So, at the displays of all packaging suppliers, recycled and recyclable alternatives as well as non-plastic, like bio-degradable, alternatives were presented. However, these non-plastic alternatives aren't taking off that fast. "The prices growers get for their products remained stable over the years, so even though they are interested in the non-plastic alternatives it is still too expensive", a plastic supplier said. "The supermarkets and the retailers demand the growers go for alternatives, but they do not give them the chance as they don't contribute to it. It would be nice if they would enable the growers to get higher prices, but they aren't doing that."

More is happening
Other things happening besides the Brexit are that the big companies are getting bigger and the small are getting smaller. "Often, these smaller nurseries go into a niche and the ones staying in the middle often do not survive."

And this development might also be connected to the fact that many nursery owners have reached the age of retirement and are about to retire. However, there are not that many successors, as children do not want to take over the business of their parents. However, there is a group that is eager to enter horticulture, but the expensive land and the lack of governmental support prohibits them from entering the industry.

Four Oaks Trade show
The Four Oaks Trade Show came to an end on Wednesday. The show that is in its 49th year kicked off on Tuesday and brought together around 350 companies - of which over 35% come from overseas - in the 23 acre Four Oaks nursery site in Cheshire, UK. The exhibition coved an area of 17,000m² under glass with additional outdoor areas. Next year, the show will be held on September 8 and 9.

Photo report
FloralDaily.com was present at the show to make a photo report, that will be published on Monday, September 9.