Anyone who wants to achieve success with biological crop protection will have to invest in natural enemies or other products as well as in a professional approach. This is the experience of chrysanthemum grower Linflowers in Bommelerwaard in the Netherlands. Eight years ago, the company started implementing biological crop protection and now spider mites and thrips – the most notable pests – are practically a thing of the past. 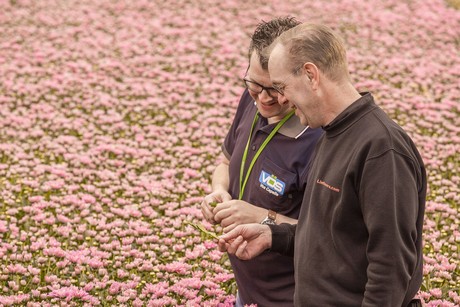 Rochus van Tuijl (in front, with Mark Kolbach): ‘We want to make sure we do not need any chemicals during the year.’

The brothers David and Rochus van Tuijl own Linflowers which spans fifteen hectares. The company's three locations are used to grow the large bloom varieties Baltica, Ibis (exclusively), Memphis, and Stresa. Via FloraHolland, they send the flowers to many buyers with a market extending from Ireland to the west to far beyond Moscow to the east. ASDA in the UK and Kaufland in Germany are among their end customers. In 2011, the two brothers concluded that they needed to set a new course. ‘The writing was on the wall,’ explains Rochus van Tuijl. ‘The number of pest control products authorized for use was getting smaller and pests were rapidly becoming more resistant. This put so much pressure on the health of the crop that it effectively put our plans on hold for upscaling. If you have to put so much effort into keeping your crops healthy, then where is the incentive?’ 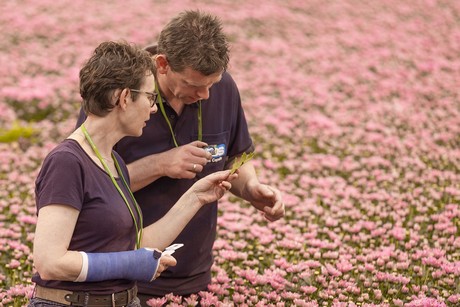 Paul Hakkenberg and Ellen Klein. The arrival of Amblyseius montdorensis helped control the thrips population, according to Paul.

Success against thrips
Biological crop protection started with the natural enemy Phytoseiulus persimilis to combat Spider mites and other mites. It worked well, but made it instantly essential to combat thrips biologically too. The chemical spray treatments used to combat Thrips would kill the Phytoseiulus populations. In 2015, Linflowers entered into a collaborative agreement with Vos Capelle and Koppert. ‘From that moment on, we tried for a while to deal with thrips by using Amblyseius swirskii’, says crop protection specialist Paul Hakkenberg, 'but the predatory mite was not the success we needed. Fortunately, the tide has turned with the arrival of Montdorensis. We started using this predatory mite in 2016 and we now have the thrips sufficiently under control. As Montdorensis also combats spider mites, we don't have to worry about them anymore.’

Practically zero use of chemicals
While success has arrived, the finish is not yet in sight because chrysanthemum crops are often also plagued by capsid bugs, caterpillars, leaf miners, and aphids. Capsid bugs – at our premises the European tarnished plant bug, the common nettle capsid, and the common green capsid – cause the most problems and although Koppert is hard at work, an effective predatory bug has not yet been found. ‘It seems to be the downside of the success we had with spider mites and thrips,’ explains Rochus van Tuijl. ‘As a result of us hardly using chemicals anymore, other pest insects have had the opportunity to establish themselves. They would probably disappear from the crop if we just did a few chemical spray treatments against spider mites and thrips each year. We hope that Koppert will be able to provide an effective solution to the capsid bug problem soon.’ 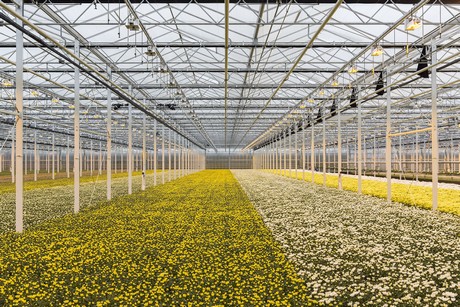 Linflowers’s experience shows that factors other than predatory bugs are also important. The way in which a company sets up its biological crop protection is at least as important.

Investing in the right approach
The entrepreneur points out that opting for biological crop protection is not exactly a choice without consequences; there are in fact far-reaching consequences. After all, success is not limited to the use of predatory bugs and sticky traps. ‘My brother and I concluded that the right approach is very important. On the one hand, there are many challenges, but on the other hand, new information and new knowledge are constantly made available. You have to be willing and able to use it all. That’s why we decided to give one employee (Paul Hakkenberg) the sole task of dealing with biological crop protection in our three gardens. We see it as a worthwhile investment in the future. After his appointment, Paul Hakkenberg followed an entomology course at Koppert. He now works closely with the consultants Mark Kolbach from Dutch distributor Vos Capelle and Ellen Klein from Koppert. ‘In this way, implementation remains at a high level of quality, a level that we want,’ says Rochus van Tuijl.

Residue-free cuttings
One of the next steps that Linflowers will be taking concerns the underground processes: what can Koppert’s NatuGro products do for the cultivation of cut Chrysanthemums? A balanced soil food web is desirable, because that makes the plant more resilient. It is also important to reduce the release of nitrogen (by allowing the plant to make better use of nutrients). Less nitrogen makes the plant less appealing to thrips, aphids, and spider mites. Linflowers is also active in the chain. Together with flower cuttings supplier Deliflor, the company is working on residue-free cuttings. As Paul Hakkenberg notes, ‘we work with a sensitive crop like cut Chrysanthemums, so clean cuttings are extremely important. If they have no residues on them, we can start with the biological pest control immediately after receiving the cutting material. We’re being taken seriously and are making progress. Koppert’s rinse sample research is showing this, meaning that both their and our efforts are paying off.’

The ultimate ambition
Lastly, Linflowers is working on GlobalGAP certification. This organization is working with Koppert to develop a protocol that will enable chrysanthemum growers to significantly reduce the use of neonicotinoids in their crops. ‘German customers want to stop using neonics,’ explains Rochus van Tuijl. ‘We want to comply with that. Our ultimate ambition is to be able to refrain from using chemicals throughout the year. When all is said and done, this is what both the market and society expressly demand. As we have shown, we are getting better and better at it.’