The journey towards realization of a business park at flower grower Oserian Development Company’s expansive farm in Naivasha has kicked off in earnest following the signing of a $10 million investment by Dubai-based Maxim Agri.

Nakuru Governor Lee Kinyanjui who presided over the signing of an agreement between the two welcomed the development terming it as the fruit of a close collaboration his government and Oserian have embarked on to establish a strong industrial base in the region to tap into global and regional markets.

Maxim Agri, a joint venture between Pakistan and the Netherlands investors becomes the first investor at the Oserian Two Lakes Industrial Park. A visibly excited Two Lakes Managing Director Robert Ward announced it was a major milestone for the company to welcome its first client, as it lays the foundation to showcase the seriousness of the venture. He disclosed that negotiations with three more investors are almost finalized and in the coming months they will welcome the new businesses. 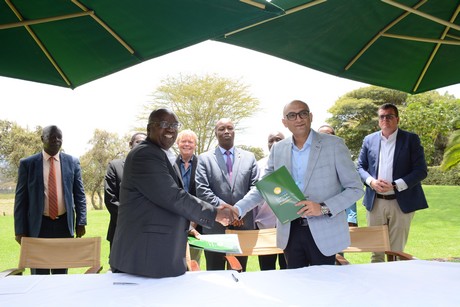 Maxim is building a state-of-the-art cattle feed production facility scheduled to roar into operations in January 2021, directly employing about 160 people and significantly improve livestock production by providing superior animal feeds and genetics, Mr Kinyanjui said adding that Nakuru is positioning itself to be a leading exporter of  beef to the Middle East and Maxim Agro inputs are geared towards supporting the plan. Increased animal production will translate into improved earnings and create employment for the youth in the supply chain, the Governor added emphasizing that demand for animal exports was on the rise going by inquiries and expression of interest.

Oserian kicked off its diversification programme in 2015 with a vision to develop an industrial park and eventually create 20,000 jobs in the agriculture value chain, aligning operations to Vision 2030 and the Big 4 Agenda of value addition and job creation.

Maxim Agri general manager Mohamed Salman said the firm took interest in the Two Lakes Industrial Park upon watching a video on Oserian after the Nakuru Investment Conference that was held in Naivasha late last year. The firm is a leader in animal feed production; additives, genetics, farm equipment, cow comfort products, and seed distribution. Mr Salman said the Naivasha plant will be its centre for East Africa. “We have been searching for an entry point into the East African market and Naivasha provides the key with the Oserian Two Lakes being a great location with reliable and affordable energy in addition to simple turnkey solutions that have removed much of the headache of entering into a new territory and a ‘can do’ attitude”, he said.

Oserian’s Finance Director, Tim Ndikwe, said the industrial park dream was finally becoming real and called on investors to follow Maxim Agri to set up at Oserian, as the farm solidifies its restructuring process into a fully-fledged commercial centre. “The Oserian Two Lakes Industrial Park has now moved from a vision to a reality’’, he said.

The Governor committed to support investors by ensuring the county synchronized issuance of licenses, certificates and other statutory requirements to make it simpler for businesses to obtain operational documents.