Things that can be done in 8 minutes and 36 seconds include boiling and eating an egg, making a bed or having a quick coffee meeting. It also includes climbing the 28 floors of the Crown Metropol Hotel in Melbourne while wearing 25 kg of full firefighting gear and breathing apparatus - or at least to Tony Bundock with Genesis Horticultural Solutions, it does. Last weekend he and his wife Karen participated in an event to raise money for mental health institutions.

The event we're talking about is the Melbourne Firefighter Stair Climb. Whereas they might be used to putting their bodies on the line regularly, there's one day per year that they do so for a good cause.

Every year hundreds of firefighters participate in the event to raise money and awareness for a charity. This year the aim was to raise money for the Emergency Services Foundation, Lifeline and the Black Dog Institute to improve support services, fund research, remove stigmas and raise awareness of Mental health issues like depression, Post Traumatic Stress Injury and suicide, especially for those within the Emergency Service and Defence communities.

Like last year Tony, being a firemen since forever, took part in the event. "It is easily the toughest event I have ever competed in but pleased to report I achieved the climb in 8 minutes and 36 seconds – an improvement on last year’s time by a minute and a half", he shares. Also, his wife Karen finished the race and finished in 11 minutes. Of course, we have before and after photos for you! 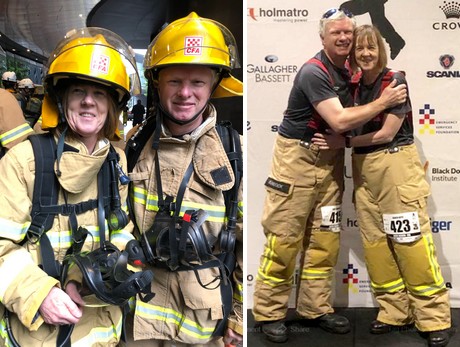 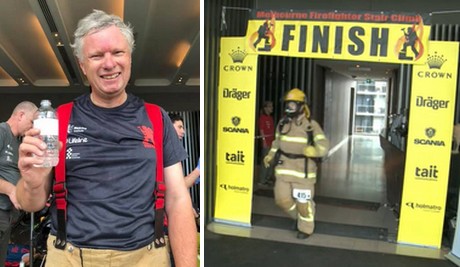 The total amount of money raised was over $500,000 - an amount that is expected to rise further within the next month.