James Cook University scientists have discovered a common honey bee disease can be deadly to native Australian wild bees and can be transmitted by flowers – the first time this link has been made.

“Pathogen spillover from bees kept by bee keepers to wild bee populations is increasingly considered as a possible cause of wild pollinator decline. Spillover has been frequently documented, but not much is known about the pathogen’s virulence in wild bees or how long pathogens can survive on a flower,” said Terence Purkiss, the honours student who conducted the study. 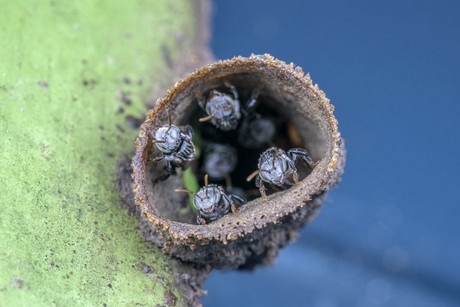 The scientists found that just over two-thirds of the wild bees exposed to the disease caught it, and those that did died at nearly three times the rate of those without it. Most European bee-hives have been found to contain the disease to some extent.

The scientists also found that flowers can transmit the disease.

“About two thirds of the flowers exposed to infected European honey bees were found to be carrying Nosema ceranae spores. In every case, at least one stingless bee that foraged on the flowers contracted the pathogen. What this means is that wild bees can be infected with the disease by sharing a flower with an infected European bee,” said Dr Lach.

Five out of the six stingless bee hives the researchers monitored over five months tested positive for the pathogen at least once.

Dr Lach said species’ geographic distributions are changing rapidly due to habitat loss, climate change, and through new species being introduced by humans.

“This leads to novel combinations of interacting species that share no evolutionary history. Introduced species may bring with them their pathogens and parasites and provide an opportunity for these to spread to new species,” Dr Lach said.

Dr Lach said more work had to be done outside the laboratory setting and within different seasons to get a clearer picture of how dangerous the pathogen is to wild bees.

“We know that new hosts will not have had the opportunity to develop defences against new pathogens and may be particularly susceptible. For example, human immunodeficiency virus and severe acute respiratory syndrome jumped from chimpanzees and bats, respectively, to humans and have resulted in millions of deaths,” she said.

Dr Lach said it was the first study to find a spillover of the pathogen from European bees to Australia’s stingless bees.

“Reducing risk of pathogen transmission from managed to wild bees presents multiple challenges and must involve the beekeeping community for any real change to occur. Development of rapid effective diagnostic tools and reliable means of preventing and treating infection will be important advances too,” she said.

The work was published in the Proceedings of the Royal Society B.