The Ethiopia Cuttings team of Syngenta Flowers planted 3,175 trees on and around the site on July 29th. With this activity, they contributed to a world record: the planting of 200 million trees in one day.

The United Nations says Ethiopia’s forest coverage declined from 35% of total land in the early 20th century to a little above 4% in the 2000s. Ethiopia aims to counter the effects of deforestation and climate change in the drought-prone country, having a larger goal of planting 4 billion trees between May and October 2019.

The country’s government called a campaign targeting to plant 200 million trees in one day, which was held on July 29th. “Since Syngenta is concerned about the environment and the Ethiopia Cuttings team would like to take this opportunity, we have been participated by planting trees at two locations”, says Zinabu Tebeje Molla, Production Operation Head at Ethiopia Cuttings. “These locations are the site of Ethiopia Cuttings and at Lome Wereda/Kolba goda kebele.” 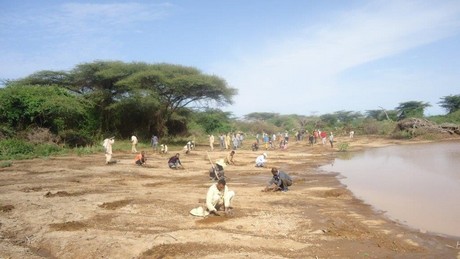 The technical team plants trees in the Dyke Area of Ethiopia Cuttings.

Each team (50 colleagues in total) had their own area for tree planting. The Technical team planted 815 trees in the Dyke area. The canteen team planted, of course, in the canteen area. They have planted 132 trees there. Besides that, the teams of General Services, Offices, Pelargonium harvesting, Pump House and Security came together to plant a total of 3,175 trees on and around the site.