A matter of finance or fashion

Russia is a flower-loving country, with the rose as the number one flower. Long stems and large head sizes were the absolute standard. However, when the crisis kicked in in 2015, the requirements have changed to shorter stems. Initially, the decision was made from a financial point of view, but since the economy has slowly but steadily improved after the crisis, demand for shorter stems remained. Is it still a conscious choice as the economy hasn't recovered, or is it an actual change in trend?

The decision for these shorter stems was in the first place made because these flowers are cheaper. Since 2015, the ruble almost halved in value and fluctuated heavily, which made importing flowers expensive and placing orders risky. Importers were forced to change to less expensive flowers, but without compromising quality. In turn, it opened doors for suppliers of shorter stems, like from Kenya, but also locally grown flowers.

Over the last years, more Kenyan flowers are entering the market, and the country has increased its exports to Russia, which was visible at the FlowersExpo. The number of Kenyan companies at the trade fair increased significantly over the last years. "The Russian consumer is now familiar with the Kenyan product", as one exhibitor put it.

Also, the locally grown flowers have increased in demand and they seem to be growing in acreage and are expected to grow even further, as governmental funds for fruit and vegetable production are coming to an end.

Currently, 15 percent of the total demand for flowers in Russia is supplied by the Russian growers, so still, the majority needs to be imported. Rose is the number 1 flower and the biggest suppliers of this product to Russia are traditionally Colombia and Ecuador, although both countries have seen demand slide a bit. According to exhibitors at the FlowersExpo though, these growers gained back a bit of the market share they'd lost.

"It is not as it used to be before the crisis, but it's not as bad as it was in the crisis. It is now about in the middle", many say. And this is not only regarding the volumes, it is also regarding the prices. They are not as low as they were, but not at the old level either. Growers hope it will return once again, but many doubt prices will recover and be at the same level as before the crisis.

For many growers exporting to Russia, it has become a more regular market - not as booming, with high prices, as it was. But still, it remains an important market for all with a lot of potential to grow, and the drive to grow in this market was clearly noticeable at the FlowersExpo this week.

Today is the final day of the FlowersExpo. At 6pm today, the Crocus Expo in Moscow will close its doors.

The team of FloralDaily.com was present at the show to make a photo report of the event. This report will be published on Monday, September 16, but below a preview.

Carlos Sanchez and Carlos Nevada of Tessa Corp. They grow roses in Ecuador and supply 50 percent of their products to Russia. They see the demand increasing, not only from Russia, but from Europe and the US as well and therefore decided to expand the farm by 12 ha, to 114 ha. In April 2020 the first flowers will be harvested. 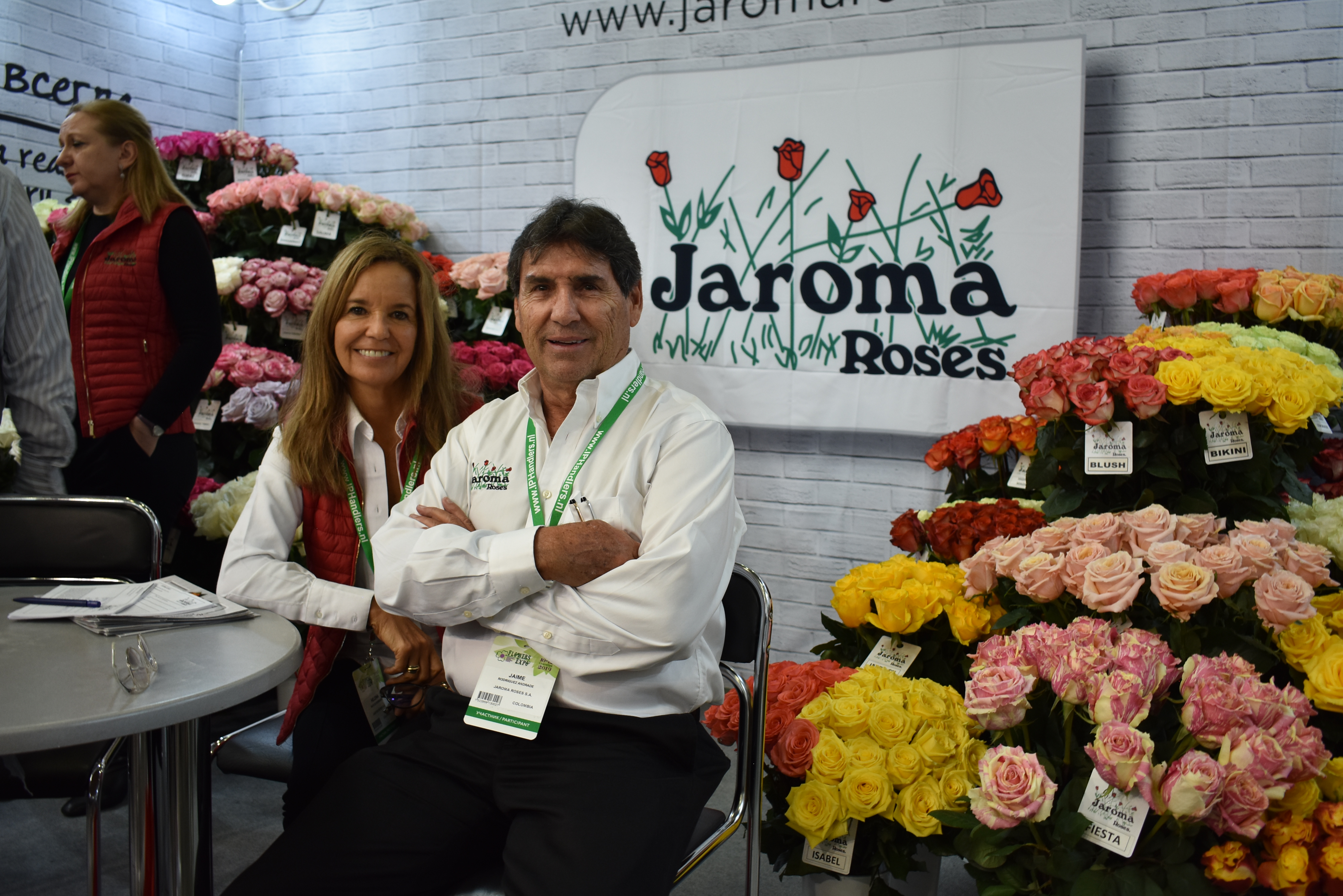 Jaime Rodriguez and Helena Mate de Rodriguez of Jaroma Roses grow roses in Colombia. Before 2015, around 50 percent of their volumes were shipped to Russia, then after the crisis, it went down to 15 percent and they are now at 25 percent. "In 2 years, we hope to be back at 50 percent again." 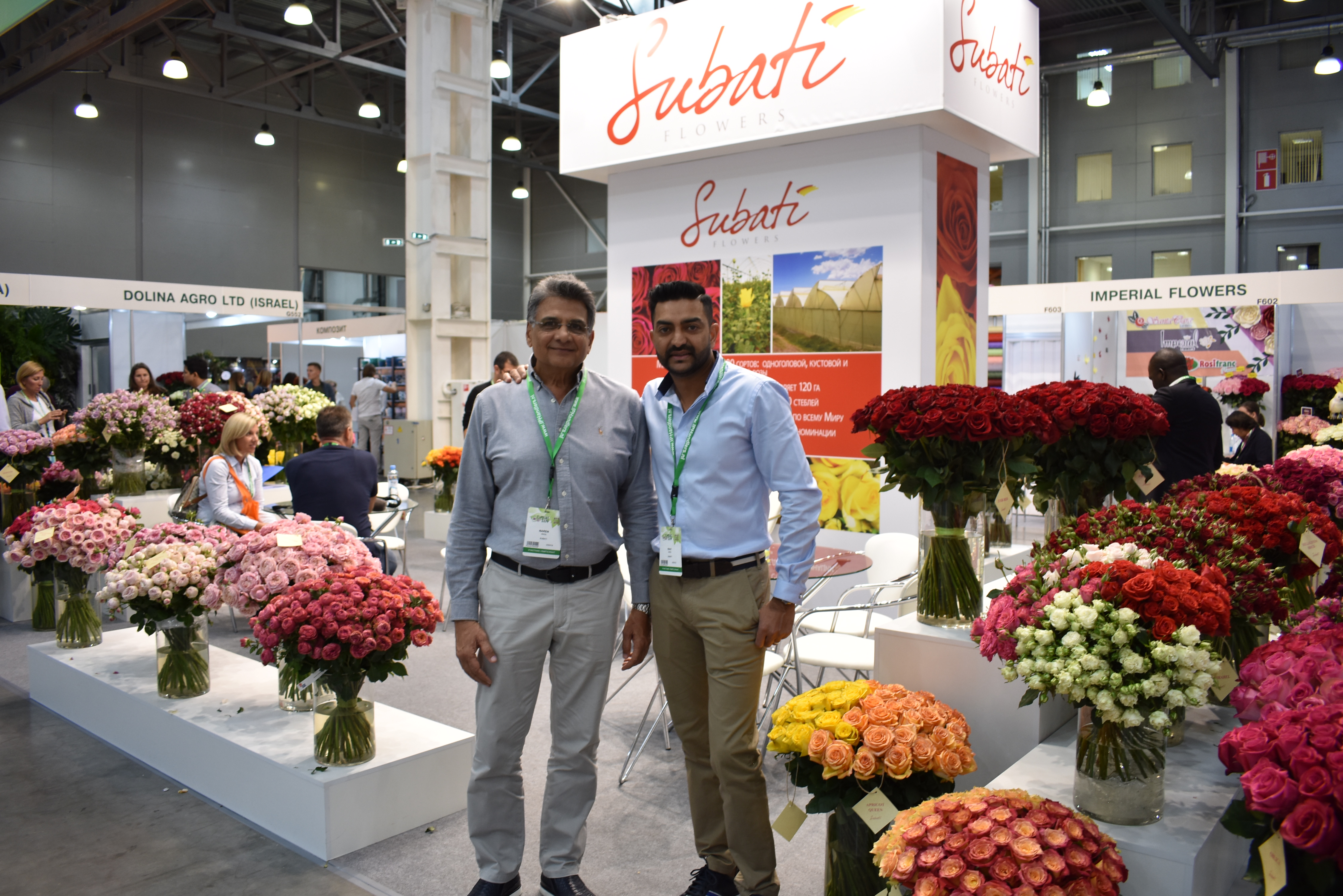 Naren and Ravi Patel of Subati Flowers. They are one of the Kenyan growers with probably the longest history in shipping flowers to Russia. They started 12 years ago with the first flowers and have increased their shipments to this country ever since.

The team of Greenhouse Complex Podosinki, a 9 ha Russian rose farm. They are growing Dutch varieties and sell them all over Russia. Currently, they are replanting 3 ha with new and existing varieties. Next year, they will replant their next varieties.