Organisers of Expo 2027 Yokohama celebrated gaining the approval of the International Association of Horticultural Producers (AIPH) at Japan’s National Day hosted by Expo 2019 Beijing on Thursday 12th September 2019 in China. 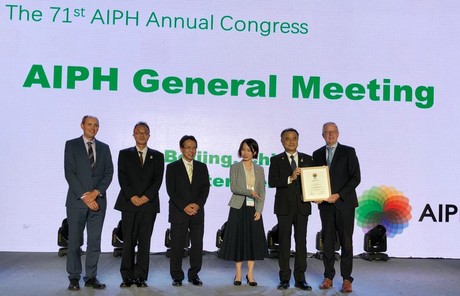 Following an application from Yokohama City Government and a successful AIPH site inspection, the members of AIPH approved Yokohama to host an A1 World Horticultural Exhibition in 2027. The approval was granted at the General Meeting, during the 71st AIPH Annual Congress in Beijing on 9th September.

The Yokohama delegation, led by Deputy Mayor Kazumi Kobayashi, detailed how Yokohama would develop a former naval base in the Kamiseya region of the city to create a spectacular expo to inspire green city development worldwide. The bid was supported by AIPH member, the Japan Landscape Contractors Association (JLCA).

The Japan National Day celebrations at Expo 2019 Beijing were attended by Mr Kevin Chung, Chairman of AIPH Exhibitions Committee and Ms Elena Terekhova, AIPH International Relations Manager. Mr Chung said “Yokohama, with the support of JLCA, presented a strong application and we believe this expo has the potential to be a significant event for Japan and will strengthen the progress in greening cities around the world and the appreciation of the importance of plants and the landscape.”