On Sunday, September 22nd, 2019, DVFlora celebrated its 60th year in business. What started as Delaware Valley Wholesale Florist in 1959 actually has roots much deeper than that. 12 years earlier, Bob Sr. and Doris Wilkins operated a small retail flower business and grew his own flowers and plants in a small greenhouse not too far from the Headquarters in Sewell, NJ. During this time they also sold their cut flowers, which included some of the most beautiful football mums, to wholesale florists at the Philadelphia Flower Market on Ludlow Street. 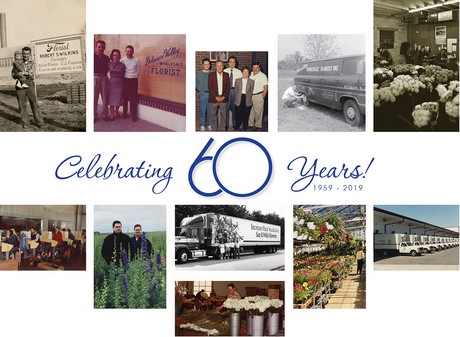 The story goes that after several years, one of the floral wholesalers asked him to become a flower salesman for their company. Bob Sr. had excelled in that position, and after a number of years, he and Doris began to think about starting their own wholesale florist business in Southern New Jersey. When the decision was finally made, they sold their home, purchased a truck, leased a small building in Pitman, NJ, and “DV” was born. At that time, they shared one desk and one adding machine. The company officially opened its doors on September 22, 1959.

When Bob Sr. and Doris started DVWF 60 years ago, they had no idea that their dream would grow into what it has become the Delaware Valley Floral Group, one of the largest floral distribution and logistics companies in the United States. Over the past 60 years, DV has been blessed with three generations of family members, committed employees, loyal customers, and supportive suppliers and many other business associates.