The most common production concerns Hoffman Nursery hear about with Panicum are yellowing, rust, and slow emergence in spring. Yellowing and rust are often related to cultural conditions and management practices. In addition, as warm-season grasses, Switchgrasses are some of the last to emerge in spring. This article will cover production scheduling and finish timing to help you take advantage of the Panicum growth cycle.

Switchgrass snapshot
Bill Hall in a talk focused on Panicum virgatum, the most widely grown species in the genus. Commonly called Switchgrass, it’s a long-lived perennial native to North America. It is deeply rooted, somewhat rhizomatous, and sensitive to photoperiod.

Panicum virgatum has a wide native range, from southern Canada down the U.S. to Mexico, Cuba, Bermuda, and Costa Rica. It was a major component of the tallgrass prairie that used to be prevalent in the central U.S. It’s also found on dry slopes, sand, open oak or pine woodlands, the shores of lakes and riverbanks, and in brackish marshes.

It can grow and thrive in many climates, soil types, and land conditions. The growing season in northern habitats can be as short as three months; in southern reaches, up to eight months. In addition to supplying forage for livestock, Switchgrass provides food, cover, and nesting material for wildlife.

A Wide-ranging, variable species
With such a large geographic and cultural range, its form and characteristics vary widely. Botanists have identified two broad ecotypes—upland and lowland—which reflect some of those differences. Upland types tend to be from more northern latitudes and exhibit greater cold tolerance. They tend to grow in drier soil conditions and tolerate drought better, while being smaller and shorter than lowland types. The lowland types tend to be from more southern latitudes and found in moister conditions. They grow well with plentiful water and grow larger than lowland types. They often have blue-green waxy leaves, a later flowering time, and seem more resistant to rust diseases. Many of the observed physical differences in the two types have to do with differences in water use and photosynthetic rate. 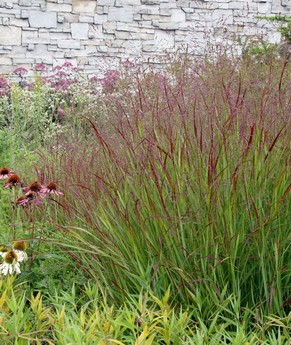 While the two ecotypes show different characteristics, there are also large variations within the two types that can overshadow the broader ecotype differences. That makes sorting out cultivated selections challenging. Forage-type cultivars are developed based on regional ecotypes, but horticultural selections can have a mix of ecotype characters. It’s not clear where common cultivars in the trade fit within those ecotypes. This is an area that needs more exploration and study.

Uber efficiency
Panicum virgatum is a warm season grass, and that’s fundamental to understanding and growing it. Most land-based plants species (85%) fix carbon using a C3 photosynthetic process. We commonly call them cool season growers. Under environmental pressures, structural and chemical adaptations in grasses and other plants over millennia gave rise to a C4 photosynthetic process. We refer to these as warm season growers. 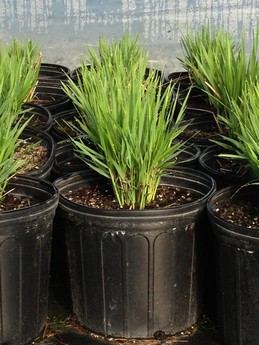 Warm season grasses have greater growth potential and greater efficiency in use of water, sunlight, and nitrogen. They grow best when soil temperatures are between 70°–90°F and ambient temperatures in the 80°–95°F range. Compared to cool-season grasses, warm-season grasses can produce the same amount of biomass using one-third to one-half of the water. On one-half the nitrogen, they can photosynthesize just as well. They can also reduce water loss under dry conditions by closing their stomata during the day. That makes them less susceptible to drought stress.

Their C4 photosynthetic pathway and uber-efficiency play a big role in understanding the growth of Panicum virgatum. It breaks dormancy later than cool season grasses, and the greatest growth occurs in midsummer. That’s when it can take full advantage of heat and sunlight. That pattern is even more obvious in colder regions, where Switchgrass breaks dormancy late in spring and summer heat is slow to arrive.