Elementary School gets a lesson in planting flower bulbs

The flower bulbs of Klaas Hogervorst brighten up a schoolyard

Between the autumn rain showers on Monday, the 4th and 5th-year children from the Antonius elementary school were planting hyacinths, daffodils, tulips, and crocuses around their schoolyard. Earlier this year, the elementary school won 1,000 flower bulbs as a result of partaking in the so-called ‘Soil Your Undies’ -challenge. The challenge was an initiative of the Royal General Bulb Growers' Association (KAVB), where throughout the Netherlands, underwear was buried to test the soil. After digging the underwear back up again in June, there was hardly anything left of the 100% cotton underwear that had been buried in the schoolyard. This proved that the soil-live in the yard was very healthy. 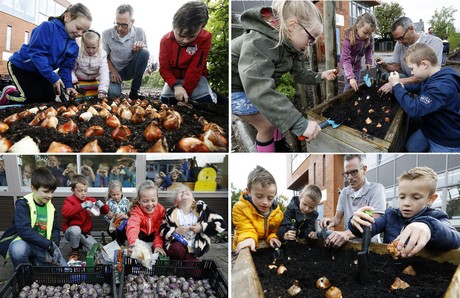 The grower Klaas Hogervorst from the neighboring town of Noordwijkerhout provided the hyacinth bulbs. He was the winner of the ‘Soil Your Undies’- industry prize and had the best soil for growing bulbs in the Netherlands. The other bulbs were provided by grower Bruno Nebelung from Voorhout. Before the children got to plant the bulbs, they were given a ‘flower bulb class’ by female grower Marit Hogervorst.

Green schoolyard
Annika Versloot (KAVB): “The importance of a green schoolyard should not be underestimated. Besides the educational values as well as the positive contribution to biodiversity, we also want to educate kids on the fun of gardening. Remove the bricks, plant the bulb. Learned in the cradle, carried to the grave.”

In the spring, the flower bulbs will flourish and provide the yard with plenty of beautiful colors and smells. Because many of the flowers also create nectar, they will be attractive to bees and other pollinators. Versloot: “This is especially important in the first few months of the year. The bees can already fly out in February. Flowering bulbs can then already provide food for the pollinators.” For this reason, the children have placed a little bee hotel in the schoolyard.