Checking out the Colombian diversity of flowers

Colombia is known for its diversity of flowers and this week, they are put in the spotlight during the Proflora, held in Bogota, Colombia. But what's the story behind these flowers? We got the opportunity to visit a breeder and a handful of farms that contribute to the creation of this broad range of products. These were BallSB, Casablanca, Inverpalmas, Flores de Serrezuela, Colombia Verde, and Rumhora. What follows is a small peek behind the scenes, later we'll plan to pay more attention to each of these beautiful companies separately, so watch this space!

BallSB
The large diversity of flowers in Colombia is made possible by the breeders. BallSB, for example. At their R&D facility, a large variety of flowers (mainly fillers) were on display. They breed limonium and gypsophila, are the distributor of PanAmerican Seed, but also test and distribute varieties of other breeders. In total, they have 300 varieties in their assortment. 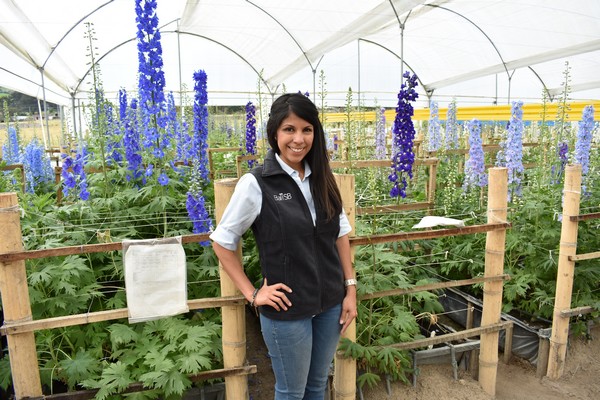 Carmen Lucia Marquez of BallSB in front of the Delphiniums

All these varieties are displayed in beds in their showhouse, which will be visited by many people in the industry. We got the chance to see it first hand. 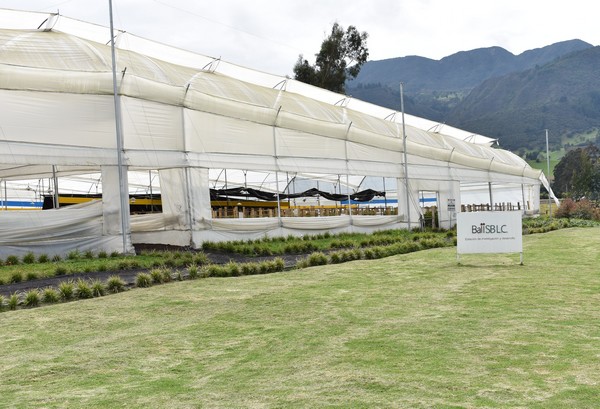 Casablanca
Then Casablanca, part of Grupo Chia. On 22 ha, they grow 10 different products, but their main product is the chrysanthemum, followed by summer flowers. 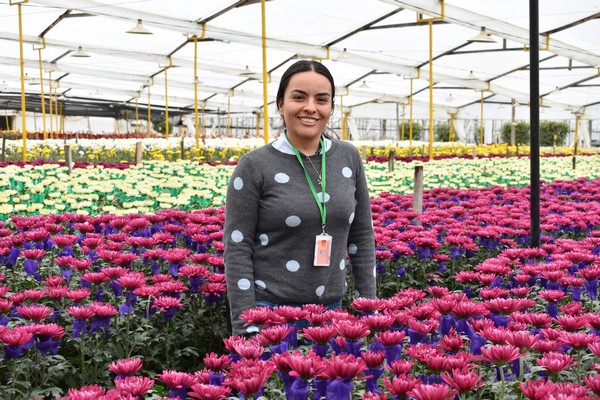 A new product that they will introduce soon is the gerbera. It is not a new product to them, as they produced it 10 years ago. Now, however, they started to grow it - the mini gerberas - again as the market is asking for it. 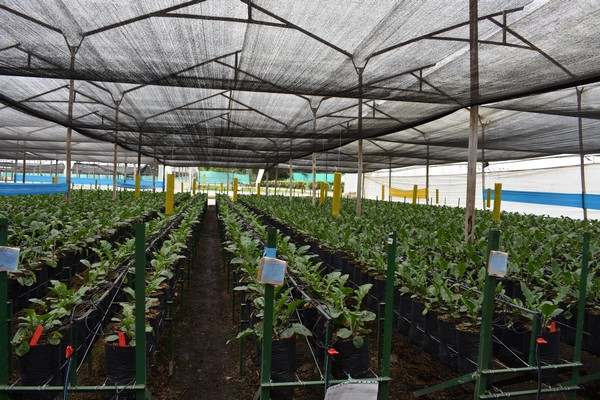 The area where gerbera plants are being grown

Inverpalmas
At 40 ha farm Inverpalmas, roses, carnations and spray carnations are being grown on two locations (a location of 30 ha and one of 10 ha). They've also been making bouquets on request for quite some years, but over the last years, they've started to promote it more. 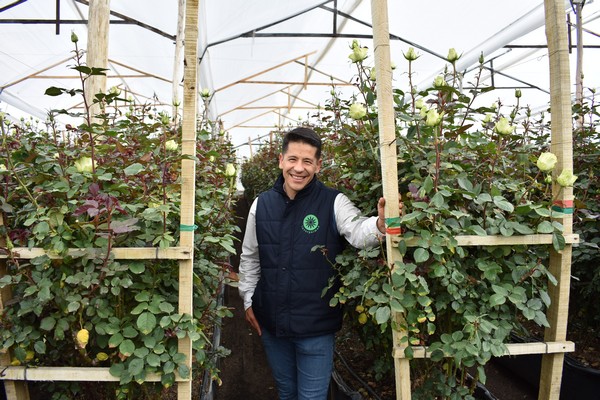 According to Gutierrez, making bouquets is one of their strengths. They use their own flowers and, when needed, buy fillers and greens from other farms. 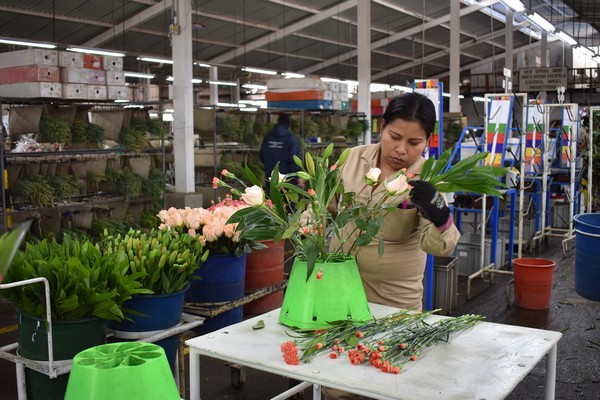 Bouquets being made at the farm of Inverpalmas

Flores de Serrezuela
Asocolflores, the Colombian association of flowers exporters, organized a press tour as well. Here we had the opportunity to get acquainted with three growers, the first one being Flores de Serrezuela. This family business, now headed by Ricardo Samper Camacho (second generation), produces carnation, spray carnation and roses. ​ 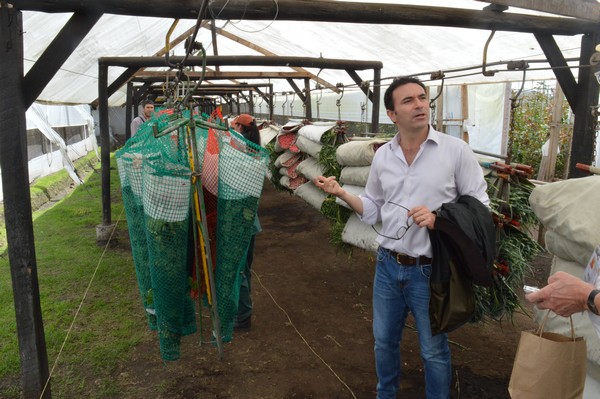 Besides more interesting aspects to the company - especially its social strategy deserves more attention - a fun detail is the transportation of flowers from the greenhouses to the place where they will be processed. Automation is in the making, but for now, a couple of horses help out!​ 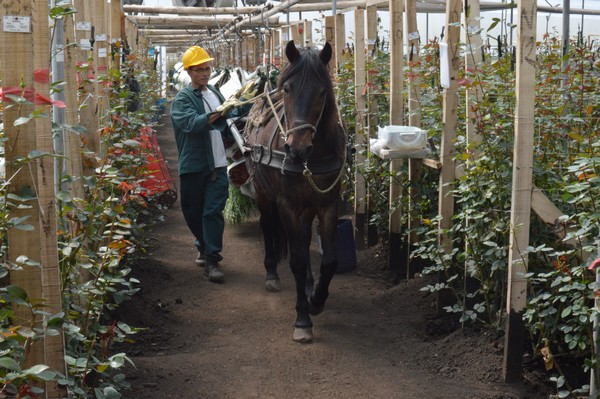 Foliage
The tour continued to two smaller (though by no means small) foliage growers, Colombia Verde and Rumhora. Though both definitely have their own different identity and distinct product range, they share a couple of important similarities. Both focus their production on foliage, a relatively niche market. The production is quite different than, say, growing carnations or even roses.​ 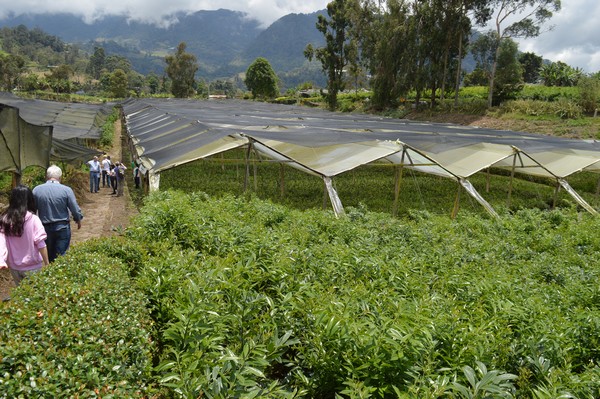 Walking about at the farm of Colombia Verde​

Secondly - and this Asocolflores hoped to illustrate in particular by picking out these three companies - the workers are treated well. For 300 dollars a month, most Westerners among us would shrink back; for the way you'd be treated, however, you might almost consider the opportunity. Generally, all workers are employed full time, they enjoy social security, they build up a pension, transportation and lunch are either for free or available at largely reduced prices, etc. It is for especially this reason, you might consider buying a bouquet for your wife tonight when you get home after work. With foliage, of course.​ 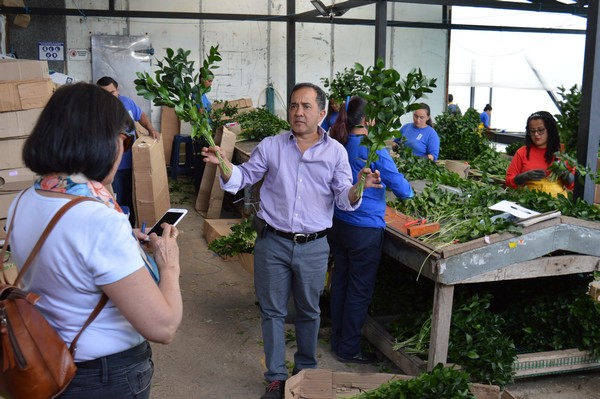 These companies will also be at the Proflora in Bogota, which starts today and will end on Friday. The FloralDaily team is present to make a photo report, which will be published on Monday.