"A disinfectant is no longer ordered from a brochure" 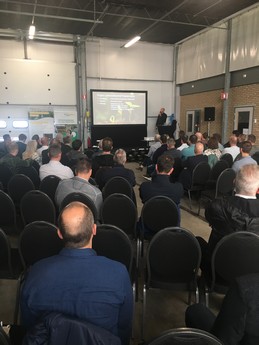 How many rounds in the greenhouse does a grower make in a day? Enough to sometimes ‘not really’ see certain things. For example, a very slow, dirty cloth filter or a condensation gutter that empties directly into the clean drain. Recently, during a day on which water in Dutch horticulture - including the WaterEvent - was central, some seventy people gathered to reflect on water quality management and ozone technology in greenhouse horticulture. After all, you don't just bring clean water into the greenhouse in a box. 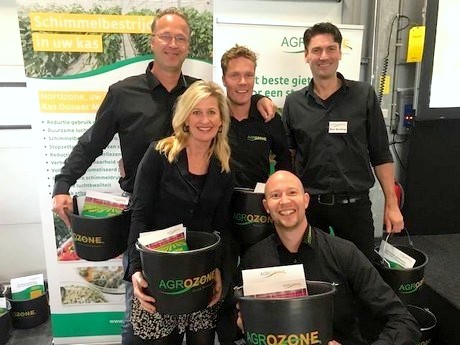 Progress in equipment
Much is already known in the field of water, but at the same time much is still unknown. During the event, Jim van Ruijven, water specialist at Wageningen University & Research (WUR), discussed all the research that has been done over the years and the knowledge that has already been gathered. Knowledge also about ozone and the application to agricultural water, with which Agrozone has also had extensive experience since its establishment in 2008. Jim related that installations were already being developed in the 1980s and 1990s with which good results were achieved, but at the same time it turned out that the same results were not always achieved, partly because the water quality was not measured at the time, while the materials of the installations were not ozone resistant. 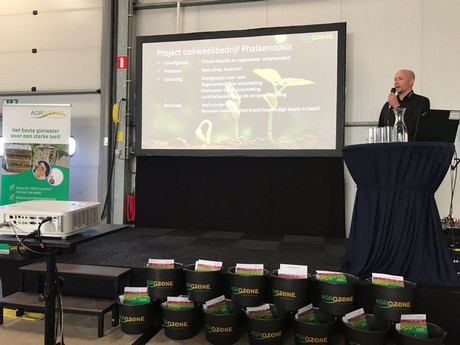 In the meantime, that has been addressed and the critical points from the last century are a thing of the past. In fact, ozone was already successfully applied in 2014 in a WUR project with the emission-free greenhouse. "And since half a year also in four departments of our fossil-free greenhouse," says Rinze.

But what exactly is ozone? Roy Imming of Agrozone gave a presentation about this. Very briefly, it comes down to the fact that ozone is a natural gas that, after tackling pollution, is converted into oxygen, which is eagerly used by plant roots. This results in strong, white roots, and growers like to see that.

Balance in the picture
That is, if the rest of the water system is also in order. "And there is still much to be gained," says Rinze. "Everyone is talking about ‘resilient cultivation,’ ‘not wanting to kill everything’ and especially ‘balance in the water system’, but we think the question is exactly what that ‘balance’ is. Not everything is clear about that yet. A water scan, which we offer to growers [during the event, pepper grower Color Capsicum won a free water scan], helps to get an idea of the quality of the water that enters into the plant and what the water quality is if it leaves the plant. If you have determined that, the grower can start controlling based on that data."

Measuring really is knowing, according to Rinze. “Now most growers often have their disinfectant tested once, twice or maybe three times a year, but that is no indication about the quality of the water that ends up with the plant. And even the installation of an ozone disinfectant alone is not enough to achieve that.

"Through meetings such as this one, with professional peers, we can take steps, create awareness and also learn from each other not to remain stuck in their own vision. Taking a moment to talk about water, especially with the grower for whom it is not his main occupation, is important. The vision of the grower is what we want as feedback for the technology and the total water system.”