The demand for a full-fledged biological fertilizer can finally be answered. After three successful years of testing, Van der Knaap Group are able to bring their biological fertilizer solution to the market. It will offer the USDA – National Organic Program growers in the US and Canada production numbers that are similar to those in traditional growing methods. The organic fertilizer is released in a reactor and administered through drippers. Ron van der Knaap: “The Canadian and the Dutch grower were quickly convinced about the effects.” 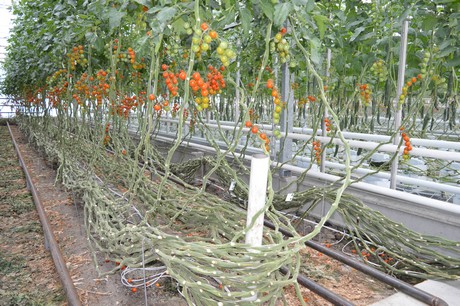 Tomato trials in ‘de Kas’: grown in the soil, using irrigation water from the reactor

Residues
The organic fertilizer is created by converting residue proteins from other industries through a process inside of a reactor into liquid fertilizer that can be delivered through drip irrigation. According to Karel de Bruijn with Van der Knaap Group, when they first tried converting the proteins into nitrate nitrogen, they tried to do it in the substrate, but that did not work. “So that’s when we started with the idea of a bioreactor,” says Karel. “With a bioreactor we convert residue protein and amino acids into fertilizer through the use of specific bacteria.” 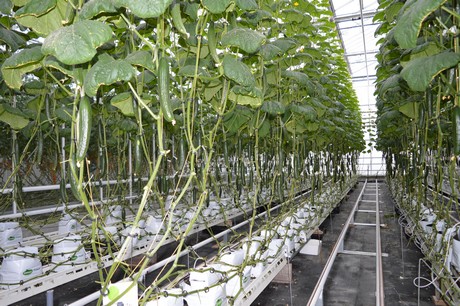 They managed to convert the protein into biological fertilizer, but ran into another issue. “In 2016 we reached the point where we had the system working for about 90%, but we still had some organic waste coming along into the greenhouse,” says Ron van der Knaap. “This clogged up the drippers and accumulated in the substrate. So for the final step, we worked together with a partner in Ede (NL) to filter the irrigation water.” 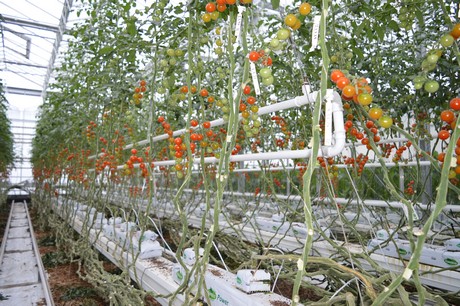 Tomato trials in ‘de Kas’: coco substrate and organic fertilizer. The taste is extremely good. We compared the same tomato variety (Axiana) grown in the soil and in substrate.

America
The organic fertilizer is now useable in growing systems, which is good news for biological growers in Canada and the US. In Europe, there is a legislative issue that means that produce grown out of the soil cannot be identified as organic produce. “With this organic fertilizer we are able to grow organically,” says Ron. “People say this isn’t biological, but this is because the rules say it cannot be. You are allowed to grow out of the soil organically, but your product cannot be marked as biological in Europe, due to legislation.”

Ron continues: “Here in Europe growing organically is inseparable from growing in soil, but when looking toward the future – taking into account sustainability and circular business – this is likely to change. When growing in soil you have emissions of water and fertilizer to the subsurface, which you will never be able to get back. When growing in substrate you catch everything and recirculate it. On top of that, the production in substrate rivals that of traditional growing methods.” 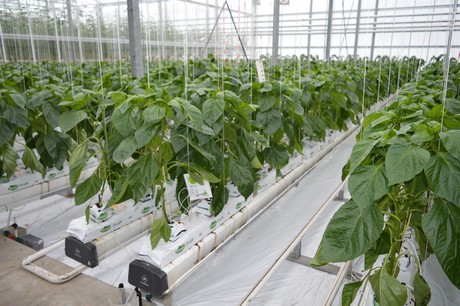 The trial with peppers in ‘de Kas’ has only just started.

In America, specifically Canada, you are allowed to grow organically in substrate, provided you reach a certain volume of substrate. “In essence, companies were already trying to grow organically in this way, but they ran into the same issues as open field production,” says Ron. “The produce didn’t look good, because the fertilizer coverage was inconsistent.”

With this new organic fertilizer, however, Ron and Karel say the produce they have been growing has looked and tasted remarkable. “We’re very proud,” says Ron. “Especially when walking through the greenhouse and seeing no discernible difference in quality between organically fertilized and minerally fertilized plants.” 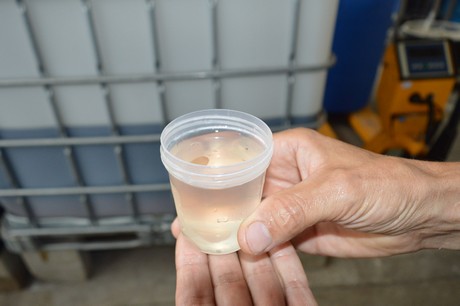 After separation, this is what the irrigation water looks like. No more clogging up the drippers.

Taste
Not only is there no discernible difference in the way the produce looks, but Ron and Karel say the produce actually tastes better. “We’re busy working on research into the difference in taste,” says Ron. “With traditional fertilizer, you have six macro- and six micronutrients, but when looking at organic fertilizer you have a much broader spectrum of micronutrients. All those micronutrients ensure certain processes in the crop, which means that different content substances – such as vitamins, antioxidants, carotene – are produced. For this research, we look at the differences between the nutrient content and these contain substances of the organically and non-organically grown produce. And we see that organically grown products with organic fertilizer contain many more substances that ensure better taste.” 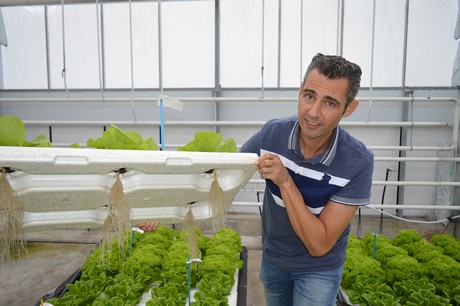 Karel de Bruijn shows the root system of the lettuce from the trial.

Growing in soil
Van der Knaap believes that the organic fertilizer might also be used to make more traditional ways of growing more sustainable. “The minerals that traditional fertilizers contain are becoming more and more scarce and so the price will eventually start going up,” says Ron. “At some point, the price will catch up to our product and then many growers might just switch, regardless of whether they grow organically or not.”

Before that can happen the product needs to be allowed for use in soil as well, which requires a Skal-certificate. “We are hard at work trying to get the fertilizer Skal-certified, and we’re well on our way to get that done,” Ron says. “When that’s taken care of we might be able to start putting these reactors down at biological growers across Europe that grow in soil. They also have issues with nitrogen supply in the soil, so this would also be a solution for them. Typically these facilities grow at 50-60% in comparison to the traditional grower, but with this fertilizer that can be increased to 80-90%.”

How it started
Nine years ago Ron and Karel met with Pura Natura, who wanted to grow organically out of the soil. “We tried a lot of different things,” says Ron. “We tried to create a fertilizing mixture that allowed to grow for longer periods of time, but the fertilizer came out irregularly, which created shortages and excess.”

At the time that they were working on this, the rules about organic growing were being discussed in Europe, and they had high hopes that they would change. “That discussion has since ended with no real solution, but we were so inspired by it that we wanted to come up with an organic system that is similar to the one used in traditional growing. With this idea, you run into one major issue, which is nitrogen. Everyone thought we were crazy attempting to make an organic fertilizer with enough nitrogen that would be able to be distributed through drippers. You’re not allowed to grow organically out of the soil, but we wanted to see if it was possible.” 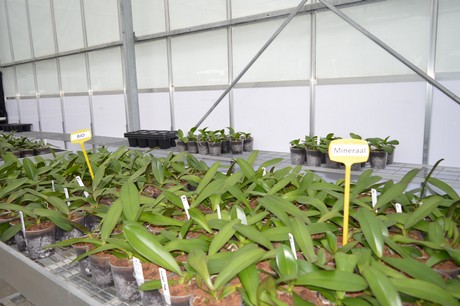 Van der Knaap has been working on the product for seven years, with a lot of trial and error. “We had compiled a lot of information,” says Karel. “At first we came up with a very nice product, a type of organic water, but it was difficult to deliver this through a dripper. We had to use double drippers, one was used while we cleaned out the other. Growers would never use a system like that over their regular systems, so it was back to the drawing board.”

They needed to find a solution, and it came in the shape of a company in Ede (NL). “We met people at a company in Ede that worked in water purification and offshore,” says Ron. “They were the key to getting our project from 90% to 100% completion. We started a company with them and all the knowledge that we had collected, and we finished the product. Now for the past two years, we have been growing various vegetables, soft fruits, and lettuce, in the way you would grow normally, but with using biological fertilizer created from residues.” 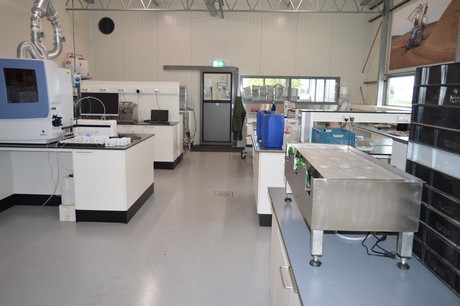 Karel: “A well-equipped laboratory is a must to be able to develop these types of products.”

Sodium removal
One more thing that Ron and Karel researched was sodium removal. “In horticulture, you work with organic materials, which all have electrolytic processes,” says Karel. “The electrolytes that are used for these processes are more often than not sodium. So when working with organic materials you always have a source of sodium, so you start seeing increased values of sodium.”

Karel continues: “This means that the wastewater has to be released earlier, in order to lower the values. However, we came up with a solution for that which we are currently testing. A sodium remover, which we dubbed Natrex. Natrex allows us to reuse all the wastewater by taking out some of the sodium with a drainage rate of less than 2.5%, so practically everything can be reused.”

Natrex specifically filters only the sodium. “The machine keeps the crop protection agents in the system,” says Karel. “From 2026 onward you are no longer allowed to discharge wastage as a grower, and the main reason for discharging is sodium, so Natrex is a great solution.”

“In the future, Van der Knaap would like to deliver the full package to the grower, we want to deliver substrate, our reactor to make organic fertilizer and also our sodium removal solution Natrex. So that growers will be completely set-up for headache-free organic growing.”