The situation in Ecuador hasn't calmed down. Over 5,000 ha of flower plantations have been attacked by the protesters, representing damages to the sector of nearly $30 million, affecting over 300 million families working in floriculture. This was announced yesterday when Expoflores declared a state of emergency. 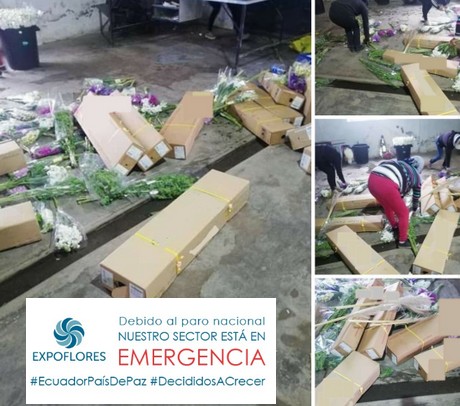 Alejandro Martínez, Executive President of Expoflores, explained that the situation reached unsustainable levels because aggression to farms and violent attacks on workers who attend work have increased, especially towards women. “With this level of losses and the impossibility of resuming normal working hours as well as the mobilization of inputs and flowers, the sector is in an emergency today. If activities are not resumed, around 20 thousand tons of flowers will be lost, which amounts to more than $250 million”, Martínez said in the statement.

Further in the statement, he says: “We have received official letters from leaders and zonal groups that expressly threaten companies and their workers if they decide to continue their daily work. The roads have been blocked with tractors, and protests are taking place outside the farms that prevent daily work."

The president of the association denounced violent attacks on the premises by hooded youths who destroy and beat workers, including women.

Expoflores keeps everyone up to date on their Social Media pages. Some posts from the last days, below:

"Cotopaxi sector, we continue to be attacked and private property is being violated."

"They force employees of our partner farms to join trucks to join the #paroenecuador involuntarily."