"Significant increase in sea shipments out of Colombia to the US"

Flower shipments by sea out of Colombia have significantly increased over the last few years. Therefore, the fourteenth edition of Proflora was the first edition to have a pavilion dedicated to sea freight. The pavilion, named A Sea of Change, included several ports, agencies and shipping lines. Also present was Marco Frieri of PortMiami. He told us about the significant increase in flower container shipments out of Colombia to the US and PortMiami over the last years. 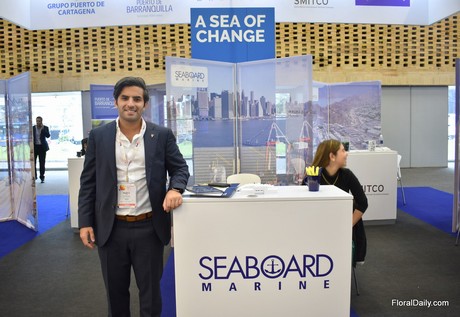 Biggest increase since 2016
“In 2018, we had 27 million stems arrive through PortMiami. This year, January to August, we have processed 95 million flower stems.” According to Frieri, PortMiami has seen the biggest increase in flower shipments by sea over the last 3 years. "Five years ago, Colombian Flowers were only 7% percent of all flowers coming into the United States by sea. However now in 2019, up to August, Colombian flowers make up 44 percent of all flowers that have now come into the US by ocean shipping. Miami is the biggest hub for flowers this year, handling, 37 percent of all Colombian flowers coming into US via ocean transportation. From Colombia, it takes as little as 4 days (depending on the Colombian port) to arrive in Miami.

Trust
“This year, we expect a record of 120 million stems will be shipped by ocean to PortMiami. The only thing that we need is importers to trust the process more”, says Frieri. “They are used to the convenience of shipping by air and they don’t all recognize the advantages of shipping by sea. Although it requires more planning, it is significantly less expensive (over 50 percent) than air shipment.” In the years to come, Frieri, expects the shipments to grow constantly. “We can handle a big increase, and our federal partners at CBP and USDA are prepared to handle an increase in flower imports via ocean transportation as well.’