Boerenbond takes a look at the figures and makes an estimate for 2019:

The Flemish floriculture overall is growing according to the Boerenbond in an interim evaluation for the first seven months of 2019, but the different divisions of the sector showed varying results. 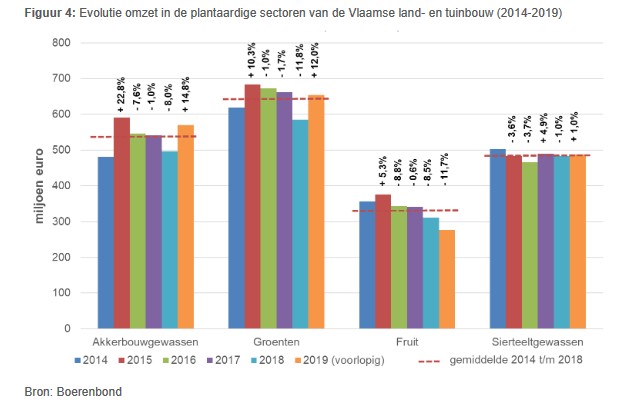 Floriculture
In floriculture, in which the tree nursery sector realizes 60% of the Flemish annual turnover and the ornamental plant growers 40%, showed varying results.

In the tree nursery sector the acreage remains unchanged. The number of trees produced and sold decreased due to the drought and the production shortage of seeds. The decrease in yield is estimated at 5%. There was, however, a price increase of about 5%, as a result of which the turnover remains more or less stable.

The Boerenbond sees various developments between the subsectors in the floriculture sector. In the sector of green plant in 2019, there is both a production increase and a price increase which increase the overall turnover. The demand is currently greater than the supply. As a result, prices are somewhat on the rise.

The production of bulbs and tubers experienced an increase in 2019 compared to 2018 by around 5%. Because of the heat, the yield is lower than normal, but still higher than in 2018. Begonias are the main bulb cultivation in Flanders.

The produced quantities for cut flowers remained the same compared to 2018, while prices fell by about 15%. For example, the prices for carnations fell by 5%, while the prices of the roses had to deal with a decline of 15%. We have to wait and see what the autumn of 2019 will bring.

There are very different signals for flowering plants. Overall, a slight price increase (+3%) is assumed, while the produced quantities are expected to decrease slightly (- 2%). 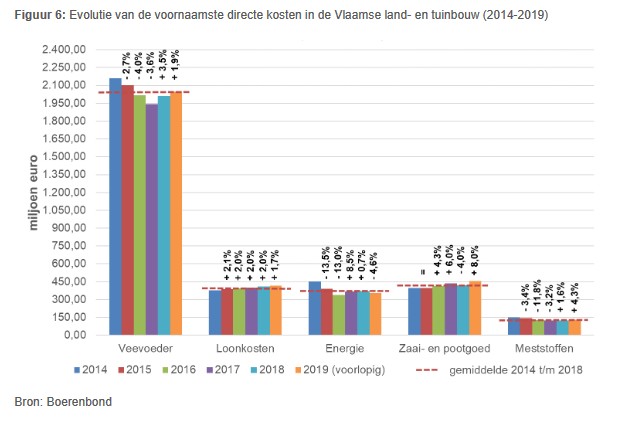 Costs
While income does not increase everywhere, the costs do increase. Among other things, the Boerenbond reflects on the cost of labor. The wages paid to employees in agriculture and horticulture represent 10% of the direct costs. For 2019, the estimate is that labor costs will increase by 1.8% (estimated inflation). This is an estimate since a substantial part of the work takes place in the third quarter. In the past period, it has also been established that labor shortages lead to rising wage costs. The latter, however, is not included in the figures.

It is true that the weight of the paid wage costs varies greatly between the subsectors. For example, horticulture, in particular, relies mainly on externally paid labor where, depending on the cultivation, wage costs can take up to 30% of the total costs.

Energy prices, accounting for 8% of total direct costs, experienced a stable trend in the first 8 months of 2019 compared to the same period in 2018. Electricity prices recorded a limited increase, while gas prices fell slightly. It is important that farmers and growers continue to focus on their own (green) energy production via CHP and solar panels.

All agricultural and horticultural sectors combined
For 2019, an 'average year' with 'large variation' is reported. There is some recovery compared to a difficult and dry 2018. A sector-wide estimated turnover of 5.3 billion euros is recorded. 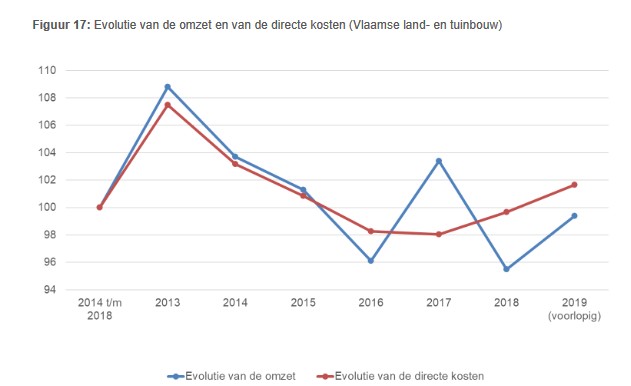 In the period 2009 - 2019, the turnover of Flemish agriculture and horticulture increased by 16%, while the direct costs (ie excluding own labor and fixed costs) increased by 19%. This means that overall margins in the agricultural and horticultural sector are under pressure. The ratio between gross revenue and direct costs in 2019 is at the same level as in 2009. At the same time, the Boerenbond notes that the margins over the past 10 years have been particularly volatile. "It remains a sad conclusion that the Flemish agricultural and horticultural sector is not able to quickly pass on the rising costs to the next links in the chain. Precisely because of that, pressure on the margins continues."