Jaap Smit, Commissioner of the King:

Ambassadors of over 20 different countries visited three companies in the Greenport in the West of Holland: Koppert Biological Systems, De Ruiter Seeds Experience and Anthura. The tour was an initiative thought of by the province of South Holland and the participants were accompanied by the Commissioner of the King, Jaap Smith. The tour had as its goal to show the best the province has to offer to an international audience.

The ambassadors and their representatives were first welcomed at Koppert Biological Systems in the Dutch town of Berkel and Rodenrijs by CEO Paul Koppert. Peter Maes, Director of Corporate Marketing, spoke to them about how the company, together with growers and in collaboration with nature (organic resources), works to make agricultural and horticultural products healthier, safer, more productive and less vulnerable.

At the ‘De Ruiter Experience Center’, the participants attended a presentation by Nico van Vliet, Borg Exelmans and John van der Knaap about the power of Dutch vegetable seed breeding. In the testing greenhouse, they looked at the presentation about the varieties that De Ruiter and fellow seed houses cultivate under high-tech conditions. They also visited the ‘market’, where they could see and taste different tomato varieties. 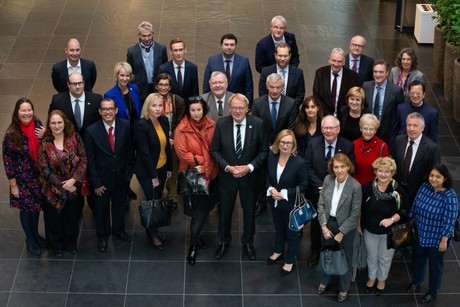 After that, the group went to Anthura in the Dutch Bleiswijk, winner of the Horticulture Entrepreneurs Award 2019, where they took a look around the production greenhouse filled with Anthuriums. Anthura specializes in the breeding of innovative and sustainable Orchids and Anthuriums for both growers and consumers. Commissioner of the King, Jaap Smith: “In Greenport West-Holland there are many horticultural companies that are in the top of their respective fields on a global scale, and it fills me with pride to be given the opportunity to show some of these companies to the international group gather here today.” 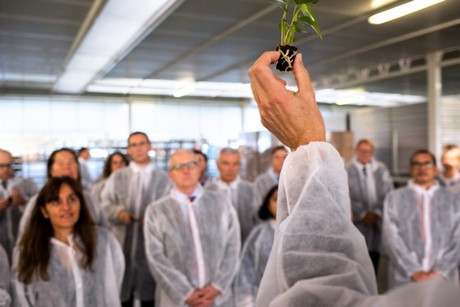 Collaboration
During the tour, the participants also received information about the work done in the Greenport West-Holland. Representative Bom-Lemstra, who is also a chairman of Greenport West-Holland, was present when the ambassadors arrived. Program leader Jolanda Heistek talked about the importance of collaboration between governments, in this case, the province of South Holland and entrepreneurs. She spoke about how governments, entrepreneurs, educational institutes and research organizations work together to create a healthier, more vital and more sustainable future for the regional horticultural cluster and both the national and international collaborations. To achieve this, the Greenport focuses on a couple of themes, such as Internationalization, Sustainability and knowledge & innovation.

Commissioner of the King, Jaap Smit: “Through this working visit we want to show the innovative strength of the Greenport to an international audience. The Netherlands is not only on the second place worldwide when it comes to the export of flowers and agro-food products, but our horticultural industry is also a world leader in our own production, product innovation and development of new technologies. The Greenport is a sector in which the economies of many countries are connected.”