Russia: Dekker and Decorum together are making progress in Moscow

On October 18, a large florist event took place at 7 Flowers Decor in Moscow. The show was a joint initiative of Decorum and Dekker Chrysanten and was held at 7 Flowers, one of the largest suppliers for florists in Russia.

More than 500 florists attended the event. Central to the show was the use of flowers, plants and decorative materials for the coming Christmas season. The timing of this show was not randomly chosen. At the same time, an important competition took place at 7 Flowers Decor for regional florists. This led to extra interest in the show, both from florists and other specialists from the florist-artistic sector. 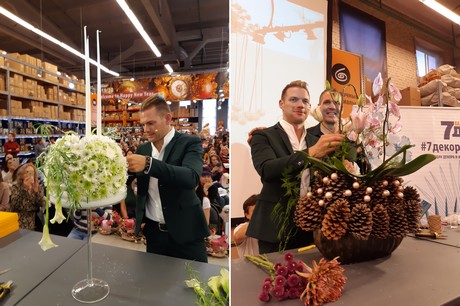 Dekker and Decorum brought in the prize-winning Belgian florist Stefan van Berlo to promote their flowers and plants during the show. The creations from the self-willed Stefan were not only impressive in terms of level, but also in terms of variety: from garment to table decoration were composed. It became clear to the public how universal flowers and plants are. Stefan mainly used new Dekker varieties, such as Alibaba, Einstein and Life, as well as painted Antonov and Kennedy. The Decorum products were also widely used: from colorful Callas, Celosia, regular and painted Lisianthus to Lilies and various plants found their place in the beautiful creations. 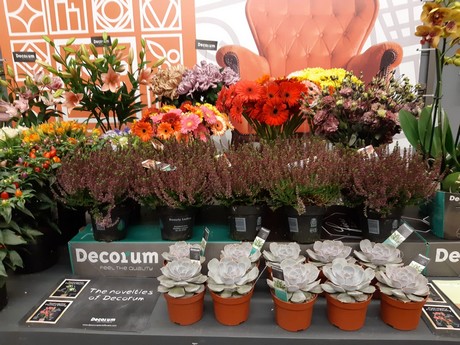 In addition to the show, there was another session for 7 Flowers staff at which they were briefed by Warja Abrosimova (Dekker Chrysanten) and Henk de Jong (Decorum) about the range of both organizations. An extensive product presentation was prepared at the entrance of the location, so that all visitors could acquaint themselves with the wide range of products. All 500 visitors also received an Antonov branch in a special 7 Flowers Decor packaging. 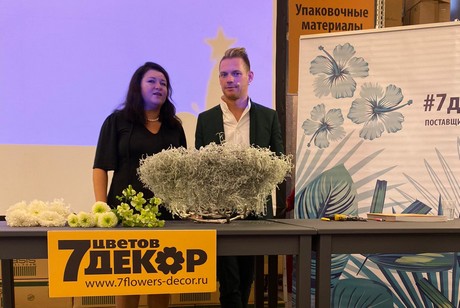 "Organizing such an event is particularly rewarding work" according to Warja Abrosimova, marketing manager Eastern Europe at Dekker Chrysanten. "The fact that florists from various cities from the area come to visit the show says a lot." Henk de Jong from Decorum is also enthusiastic about the joint show: "This was the second time that we organized such an event together and again it was a great success. For us, but certainly also for the visitors. That's what it's all about. We will certainly continue with this. Decorum and Dekker complement each other well. Together we are even stronger on the Russian market. ”So up to the next year!