Van Geest Bros. Limited is celebrating their 60th year of business. They grow cut gerberas at their 300,000 sq.ft. greenhouse in Grimsby and St. Catharines and on November 2, there is an open house at their St. Catharines location. 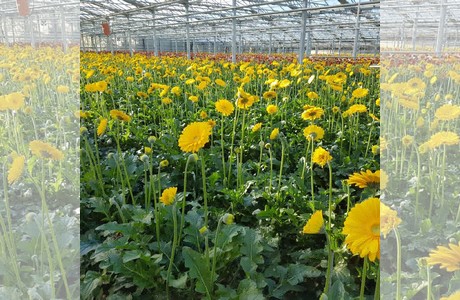 Dutch heritage
The business was started by Cor and Adrian Van Geest in 1959 in Grimsby. The Van Geest family moved from Holland shortly after the war to Canada. Their father had a greenhouse in Holland, so it was natural for the boys to start doing this in Canada. They started growing Carnations, Boston Ferns and a few other crops. Adrian left the business to start his own. Cor grew commercial mum for many years. It has changed many crops over the years like snaps, alstroemeria, lisianthus and stock. In 1986 Van Geest expanded to St. Catharines.

2 years ago - cut gerberas only
2 years ago after a fire in a part of the greenhouse the last of the mum crop was taken out and now it is all cut gerbera. They have over 40 large varieties and 30 mini gerbera varieties.

Still a family business
After 60 years of growing flowers Van Geest Bros is still a family company. Nowadays, it is run by some of Cor's kids, John, Bryan, Colin and Andrea. The other children are all in the flower business as well.

Open House
The open house is at the St. Catharines location which has all the mini gerbera and some of the large gerbera grown there.