There is no doubt that they attract attention. But, in the long run, VR glasses must be more than just a nice gadget. "Promoting our growers is our main goal now," says Costin Beliciu of the Ontario Greenhouse Vegetable Growers (OGVG). This company was at the PMA in Anaheim, California.

"However, eventually, we want to also use these glasses to give virtual tours during training. We want to attract people to the glasshouse horticultural sector. The latter is, perhaps, the most important." 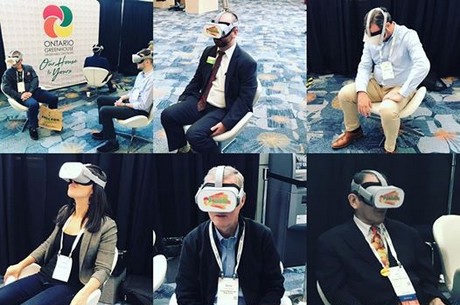 Costin represented the OGVG as an exhibitor at this recently-held trade show. At the OGVG stand, visitors could take a 360° tour in virtual reality. Much easier, of course, than 'quickly' driving to the greenhouse for a visit. Especially in North America, where people have to drive long distances between places.

A sneak preview distributed prior to the trade fair.

Large regional growers working together
After putting the glasses on, people sat in a chair. This made it possible to look around. The tour then began. This tour is a first trial version, according to Costin. He says it can be made to be more interactive, with more movement. Yet, even now, participants quickly find themselves right in the middle of a greenhouse. Even in a cart with bell peppers. Or 'sitting' next to a punnet of tomatoes on a packaging belt.

People can, of course, not experience the packaging of products if they visit a farmer's greenhouse. The intention is, however, to inspire people who have taken the 'tour'. They should become excited about growing vegetables in greenhouses. Visitors must not be able to stop talking about it - just like in the past, when people could say enough about their trip to the greengrocer.  The VR video is a collaboration between large growers in the region. 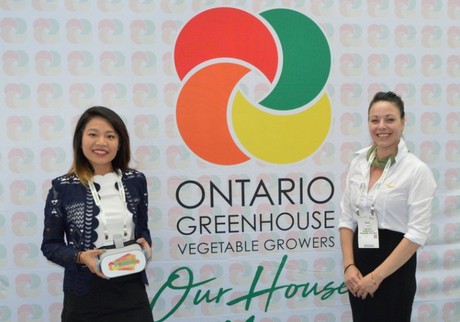 The OGVG's Sarah Pau and Dani Sweet at the trade show in Anaheim.

Recruiting staff
It would be great if people who took the 'tour' decided they would like to work in the greenhouses every day, themselves. They may even inspire those around them to do so. They might be the ones filling the trucks with greenhouse vegetables. This can be seen at the end of the six-minute video.

The 220 affiliated OGVG growers are good for more than 600 hectares of greenhouses. They would be happy for the extra help.

VR glasses are slowly entering the sector
It may have been the visitors to the trade show's first experience with VR glasses. This technology is, however, gradually becoming better known in the glasshouse horticultural sector. In Germany, for example, these glasses already made their appearance in 2017. They were used at the German Fruit and Vegetable Congress, the Deutscher Obst & Gemüse Kongress. At the German international trade show, Grüne Woche, that same year, they were again used. Here people could take a virtual look at a Dutch greenhouse.

In 2018, the Dutch crop innovation company, KeyGene, used this technology at the opening of their Crop Innovation Center. And, more recently, at an afternoon lecture about Provine. This is Nunhems' TOV variety. Here, growers could try to find healthy buds from a distance. This product has been having problems with a virus.