At the Trade Fair Aalsmeer, HBA (Hydrangea Breeders Association) is putting the Royal Palace and Royal Parade in the spotlight. Two new, single-flower pruning varieties. Agrion Director Jaap Stelder notes there is a lot of interest in HBA’s cut hydrangeas. ‘We are bringing true phenomena to market.’ 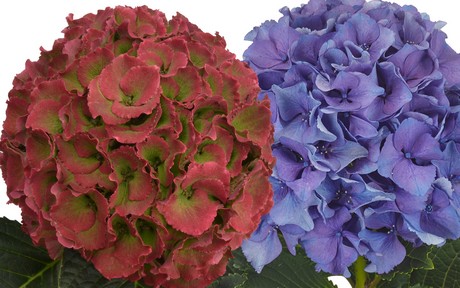 In September, Royal Palace already attracted a lot of interest at the National Summer Flowers Show in Naaldwijk. The selection was nominated for the Stimuflori Innovation Award and the specialist jury awarded it a score of 9.50, the second highest score of all competing hydrangeas. ‘Royal Palace is something truly special’, Stelder says, as he walks among the plants in the greenhouses in De Kwakel. ‘The keeping quality is exceptional. Feel how firm these flowers are’, he says, laying his hand on a flowerhead. ‘In a vase, these stems are will easily last four weeks. And the colour evolution of the cup-shaped flowers is so beautiful, through to a deep crimson in autumn.’ Royal Palace is a good pruning variety. It is easy to cultivate, easy to blue and it flowers relatively early. The flowers are slightly smaller in comparison to other varieties. The production per square metre is relatively high.

Large quantities
Stelder walks over to a section of the greenhouse containing Royal Parade, the second cut flower hydrangea introduced by HBA at the Trade Fair. He shows the long stems and the large, even flowerhead. This variety will appeal to growers, he thinks. ‘Parade is easy to grow. It is a real pruning variety, which blooms on new vegetative shoots without unproductive branches in summer. With its deep blue flowers that continue to change colour through autumn, I see Royal Parade as a popular variety for large quantities. It is a variety that will be able to compete well with other blue hydrangeas.’

Browsing
In De Kwakel, HBA has reserved space for growing young plants from novelties. Annually, several thousand young plants of each variety are potted in 14 cm containers. Stelder: ‘Using those plants, interested growers can fill a watering section to become acquainted with our new varieties. If it is to their liking, larger quantities can subsequently be ordered from our propagator.’

To stimulate the market even more, and to introduce interested parties to the new selection, HBA has recently started offering several varieties for auction in Aalsmeer. This concerns small quantities of real novelties. ‘We don’t want to be a producer’, Stelder emphasises. ‘The intention is to encourage growers and exporters to browse through the novelties we can offer.’

There is a lot of interest for the HBA introductions, Stelder comments. ‘We have been participating for a number of years, but now our work is beginning to show results. We don’t focus on mainstream varieties, but search for niches. We want to introduce the market to exceptional, distinctive varieties that add value.’