The project ‘Monitoring energy innovations in practice’ of Kas als Energiebron is, among other things, looking for a relationship between the appearance of lines in alstroemeria and the cooling down of the crop as a result of eradiation. So far, a firm conclusion cannot be drawn. 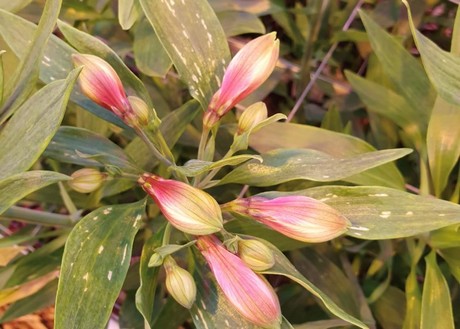 The project ‘Monitoring energy innovations in practice’ aims to achieve energy-efficient horticultural production by acquiring and sharing knowledge about the impact of various energy-saving measures on the greenhouse climate, the use of energy, the crop growth and the company performance.

Within this monitoring project, a climate comparison was started at the beginning of 2019 between four alstroemeria growers (five departments) under the supervision of the Flori Consult Group and Wageningen University & Research Greenhouse Horticulture. The purpose of this comparison is to explain a physiological abnormality that threatens the leaf quality: white lines in the leaf. The idea is that the greenhouse climate, and especially the plant temperature fluctuations and eradiation, could be the cause of this phenomenon. The presence of lines is tracked weekly and passed on by the companies themselves.

Involved companies
Three of the participating companies have a single screen; one company has two screens. There are also differences in cultivation substrate: one company grows on coco, the three other companies in soil. There is a department with a greenhouse roof of diffuse glass. All companies grow sensitive cultivars.

The growers have purchased additional sensors for this research, such as a radiation meter and measuring boxes. A thermal imaging camera has also been installed at every grower. Furthermore, every grower has taken out a LetsGrow subscription to easily share the climate data. The growers meet each other about once every six weeks to discuss the state of the crop and to discuss the differences between them.

Analysis
Stripes were reported on several days in April, May, July, August, September and even in October. Next, an analysis was made of the climate during the days prior to the report and simulations with the ‘radiation monitor’ tool. So far it has not been possible to establish a substantial relationship between the appearance of stripes and the cooling of the crop resulting from the eradiation.

The grower with two screens is still damage-free. Other differences between the growers with and without damage that may play a role are the cultivation in the soil or on substrate and the origin of the CO2. The CO2 concentration can be high when windows are closed. There are also large fluctuations in humidity within a day.