One of the most important tenets of plant pathology is that the first step to effectively controlling a plant disease is identifying its cause. Otherwise, control measures could be ineffective, leading to further plant loss and wasted time and resources. This is especially true of rose rosette disease (RRD).

Typical symptoms of RRD are known and widely accepted; they include rapid elongation of new shoots, witches’ brooms, small or distorted leaves, red pigmentation of stems or foliage, and excessive thorn development. However, none of these symptoms is guaranteed to be expressed when the disease is present, especially early in the disease cycle. An infected rose may have something as subtle as a thickened cane or flowers with fewer than normal petals – either of which could be easily overlooked or dismissed as a nutrient deficiency or even herbicide injury. Early RRD symptoms can be diverse in expression and may vary based on age of plant, cultivar, and environmental conditions, but later in the disease cycle, symptoms usually become overt and obvious. But by this stage, RRD has likely spread to neighboring plants. 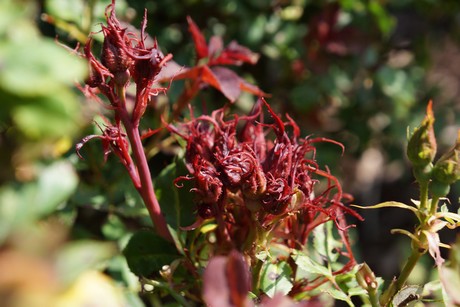 The simple fact that RRD is caused by a virus alone, makes confirmation of the disease more challenging. There are no obvious signs of the disease’s presence like with powdery mildew where white, powdery spores are prominent on leaf undersides. Complicating matters further, infected plants can be symptom-free for months, and viruses cannot be seen with a microscope, let alone a naked eye. Eriophyid mites transmit the virus, but even the mites are difficult to find. They are too small to be seen with the naked eye and are often difficult to find. Diagnosticians and scouts have no choice but to rely on visible, observed symptoms, until serological and/or molecular techniques can be conducted in the lab. 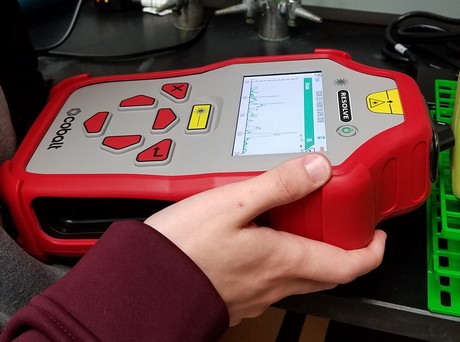 Nebulous expression of symptoms early in the disease cycle is exactly why researchers direct their energies towards diagnostic tools development. In the case of RRD, it is critical to find a means of quick and easy diagnosis, preferably without having to destroy the plant. Researchers have been working since 2014 on various aspects of RRD through a multi-year, multi-million dollar grant titled ‘Combatting Rose Rosette Disease’ funded by USDA NIFA, and development of diagnostics has been a key component. Knowing sooner that a plant is infected will, in the very least, help limit spread and movement of the disease. 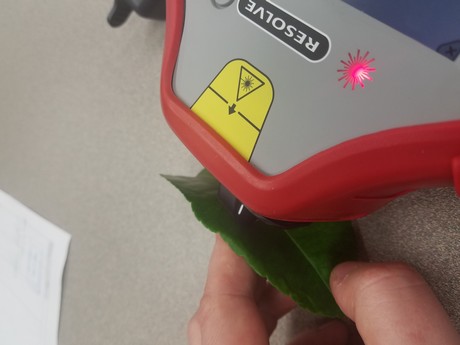 A small team of researchers, part of the larger group mentioned above, from Texas A&M, led by Dr. Dmitry Kurouski, developed a new diagnostic tool for RRD detection. Using a hand-held, portable spectrometer, Dr. Kurouski’s team has correctly identified the virus in leaves both non-invasively and non-destructively, with an almost instant read. Raman spectroscopy works by relying on light to interact with molecular vibrations in a leaf. A ‘fingerprint’ is made based on these vibrations, meaning that the virus that causes RRD is identified by its unique fingerprint. Previously the team proved that this technology could identify fungal diseases on corn, wheat, and sorghum and eventually adapted it to successfully compare healthy and asymptomatic rose leaves, as well as symptomatic and asymptomatic leaves. They could even differentiate rose leaves with different degrees of infection.

While not yet ready for widespread adoption and use in the industry, this tool can help diagnostic labs by acting as an initial screen for RRD that can help save on more costly, molecular techniques. Plus it may be available for use in the field one day.

The American Rose Society provided small research grants for a portion of this work.

AmericanHort and the Horticultural Research Institute affiliate, in conjunction with like-minded organizations such as the Society of American Florists, previously supported funding of rose rosette research at the University of Arkansas through the Farm Bill Section 10007. AmericanHort participates on the advisory board of the Specialty Crop Research Initiative (SCRI)-funded Combatting Rose Rosette Disease project.