Kurt Kramer, the German breeder for winter-hardy heather species like Calluna vulgaris, Erica x darleyensis, Erica carnea and Daboecia cantabrica, received on November 17, 2019 in Potsdam the highest honour from the AZERCA, the German Growers Association for producers of Azaleas, Calluna and Erica. 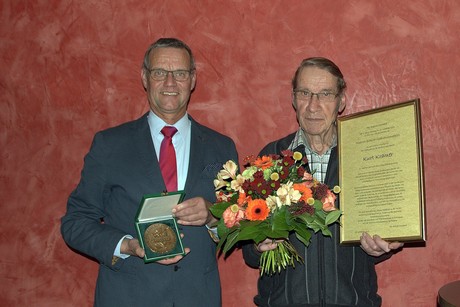 Breeding started 45 years ago – exactly on November 17, 1974 in his small nursery in Northwestern Germany. In 1997 Kurt Kramer created the plant brand Gardengirls, today synonym for winter-hardy heathers thus paving the way for Calluna to become the No. 1 bedding plant in Germany. Breeding breakthroughs, persistence in issues regarding breeder’s rights, license administration and marketing for heather are the key components leading to horticultural and financial success for most of the AZERCA growers in Germany and in many European countries.

The Friedrich-Scherrer medal joins many other honours for this successful nurseryman, for example, the Georg-Arends-Medal for breeding of the German Central Growers Association (ZVG) in 2004, the TASPO-Award for the most-outstanding new variety Athene in 2008 and the Entrepreneur of the Year Award by TASPO in 2012.