An enterprising SAC Consulting advisor, who pioneered the use of the robust Polycrub polytunnel for numerous island businesses, has moved from Stornoway to join the Oban-based team.

Rob Black, who worked for SAC Consulting on the Isle of Lewis for four years, successfully applied for grant funding from the Crofting Agricultural Grants Scheme (CAGS) to invest in the rigid-framed greenhouse. 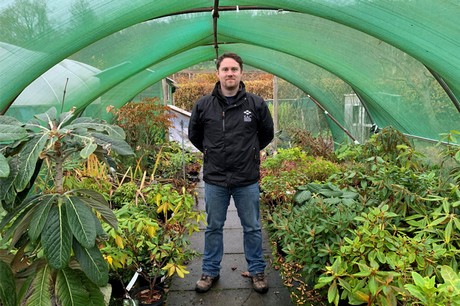 CAGS grants – which support infrastructure projects in the Highlands and Islands Enterprise (HIE) area – are typically used by crofters for agricultural improvements such as drainage, reseeding or erecting farm buildings.

The funding has enabled scores of island crofts to diversify their incomes into a host of covered crops – including salads, vegetables and even Hebridean lemons.

Rob said: “The Polycrub is a greenhouse that is manufactured in Shetland by what was a community-run social enterprise project. It is made from recycled materials, including waste pipes reclaimed from the salmon farm industry.

“For crofters, making a traditional living from the sale of beef and sheep is impossible without another source of income. One of my clients had been considering diversifying into growing fresh produce, but he knew this would only be possible in a very robust structure like the Polycrub, because his croft is so exposed.

“I offered to work with him to see if we could obtain CAGS funding for erecting four Polycrubs on his croft. It took a lot of work, but we successfully received the grant, which gave him 80 per cent of the capital cost for the project.”

Rob has since been contacted by more than 100 people looking to install Polycrubs, or similar structures, to extend the scope of their crofting and farming businesses.

“There is a lot of land that’s derelict on the islands and people don’t want to take on crofts that won’t make money from sheep,” he said. “The Polycrub, and the related funding, has given crofters an alternative; all of a sudden they can have livestock and fresh produce, so it’s a great option either for current crofters to add another enterprise, or for new entrants to make a start.”

Rob’s expertise has since extended to his involvement in setting up a Rural Innovation Support Service (RISS) group with local producers to explore new routes to market, and a supply chain, for produce grown in Polycrubs and other covered structures on the islands.

“Polytunnels and greenhouses offer the opportunity to supply fresh, local produce to local cafes, hotels and shops, and to reduce the carbon footprint of the local food economy,” he said. “The RISS group is still in its infancy, but it has huge potential to make a real difference to the local food economy, and it’s great to be using my experience to help develop this idea.”

Rob was originally brought up in East Lothian and is from a non-farming background. He studied at SRUC before becoming a consultant.

“I always wanted to be an SAC Consultant and my first posting was to Stornoway which has been a challenging, but hugely rewarding place to work,” he said.

“I had no idea of the distances I’d need to cover, nor the weather conditions I’d have to contend with, to visit clients on the islands – some visits were four hours and two islands away from our offices.

“But I’d be hard-pressed to find more resilient, welcoming and pioneering people anywhere in the world.”

Rob will extend his involvement in supporting crofters to diversify into polytunnels, Polycrubs and greenhouses on mainland Scotland, and will continue to be involved in the projects he started in the Outer Hebrides.

“The ideas are endless for how these structures can be used for production and income generation, even in the extreme weather that the Highlands and Islands crofters encounter,” he said.