US: How a cup of coffee can lead to a new company

an with a cup of coffee at the California Spring Trials in 2015. Jim Eason (EHR), Ko Klaver (BTC), Arjen Vriend (PG), and Rick Grazzini (G2) met and each had a business need that the other independent companies could meet, with a goal of working together more effectively to improve the products and services delivered to their customers. After years of working out the logistics a new source for exceptional plant genetics, GardenChoice, was born and it was launched at Cultivate ‘19.

Alliance
The alliance is the brainchild of four leading horticultural companies, including:

Here’s a peek into how the alliance was formed:
GardenGenetics breeds herbaceous perennials and wanted to work more directly with a field-scale perennial grower, and Pioneer Gardens could be that grower. EHR wanted earlier access to new, independent genetics, but also wanted to be part of improving the supply chain. GardenGenetics and Botanical Trading Company could provide innovative genetics, and Pioneer Gardens could produce liners and bare-root plants of those new genetics. Pioneer Gardens wanted access to proprietary perennial genetics to differentiate its product offering from its competition, and GardenGenetics was already working to develop improved herbaceous perennials. Finally, Botanical Trading Company wanted new products, particularly herbaceous perennials, which it could promote to its box store growers.

After many years of working out the logistics, GardenChoice was born, poised to serve every level of the horticultural marketplace.

“Our strengths and synergies are rooted in the diversity of our companies.  By combining talent and resources, we have created introduction, production and sales solutions for new genetics from independent plant breeders." ~ Arjen Vriend

"Independent businesses can provide quick and responsive solutions for growers. An alliance like GardenChoice enables each core business to do what it does best, without 'recreating the wheel' in yet another new business venture."  ~ Rick Grazzini

"EHR realized that independent breeders needed a more efficient, lower cost alternative to introduce their genetics to the trade and consumer. Once these new genetics are ready for full introduction, GardenChoice will utilize all of the best brokers in the trade to maximize distribution and returns for independent breeders around the world."  ~ Jim Eason

A Dahlightful Start
It’s time to look for the first introductions from GardenChoice, the Dahlightful dark leaf dahlia series, which is available now from brokers and rooting stations. These compact, dark-leaved garden dahlias show great season-long performance in the garden and are considered among the best-performing dark leaf dahlias anywhere. Plants in the Dahlightful series produce beautiful flowers from early through late in the season.

All five everblooming Dahlightful colors are adapted to growing almost everywhere in the US and Canada.  They’re upright with tidy compact habits, growing 20-28" tall and equally at home in containers and in the landscape.

In additional to Dahlightful® dahlias, there’s lots more to come. 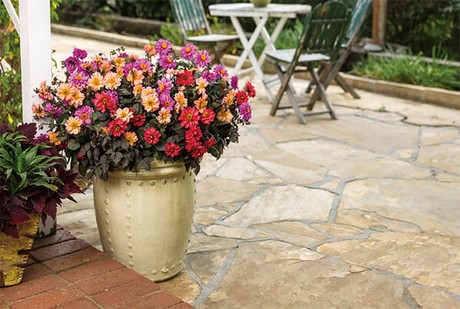 Moving Forward
You can depend on GardenChoice because we’re a start-to-finish solution releasing only exceptional, tested genetics with adequate supply.